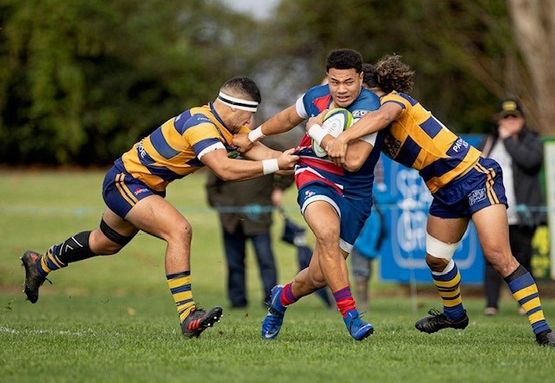 The top four sides in the McNamara Cup maintained their positions and took big steps towards the semifinals after some close-fought games on Saturday.

Doug Sanft’s side were tested but ultimately had the answers for a Patumahoe side looking for three-straight wins.

The score was 13-all for the majority of the second half before the visitors added a late penalty goal to creep in front. Patumahoe had possession in Ardmore Marist territory during the final five minutes but were unable to find the match-winner.

“I thought that could have gone either way,” coach Doug Sanft said. “Big ups to Patty – they played for the full 80 minutes. I thought that last play we were going to lose it but it was good character from my team [to hold on].

“It is good to judge the depth in our team because we had about 10 guys out.

“I am happy – I am more happy with our young guys coming through though.”

“It was a little bit scrappy from both teams in the first half I thought,” Bombay coach Jeff Marr said. “We were probably just a built guilty of making a few errors down in our half and probably trying to play too much width at the start.

“A lot of that was down to the fact that it was the first weekend for a few where we had no wind and dry conditions.

“The second half the rain came in and the wind picked up and we got back on track.”

The result that guarantees the visitors a semifinal spot and makes it extremely hard for the home side to get back to the knockout stage.

Marr was worried about having a final round bye but they have done enough to secure a spot in the top four regardless of what happens now. Instead his side has two more games to try and make life a bit easier on themselves.

“Just to keep momentum and hopefully keep working towards a home semifinal,” Marr said of his ambitions in their final two round robin games against last year’s finalists Ardmore Marist and Patumahoe.

Manurewa Kidd Contracting got back into the winner’s circle with a crucial 10-7 win over Pukekohe Mitre 10 Mega at Colin Lawrie Fields that puts a massive dent in the home team’s semifinal chances.

Manurewa on the other hand have secured themselves a place in the final four and will now be playing for home advantage over the remaining weeks.

“It was a tough game at Pukekohe with a big crowd,” Manurewa coach Jeremy Clark said. “The conditions weren’t that bad – not as bad as the week before – but it was a real grind with a lot of defense.

“I have to commend them – they defended well. It had a semifinal feel to it.”

Waiuku Brian James Contracting continued their strong second round showing with a 29-22 win over Papakura Ray White at Rugby Park in Waiuku.

“It was definitely a good game,” Waiuku coach Lawrence Lawrence said. “It was a game we started really well in. Massive credit to Papakura – they didn’t let us get away and always came back with something.

“We wanted to play a little tighter this week and earn the right to go wide. With rain on and off we had to be a bit more clinical.”

The bonus point win lifts Waiuku to 26 competition points – five off fifth and 12 off fourth - and leaves them wondering what might have been had they managed an extra win or two in the first round.

Ardmore Marist won the battle of the Bob Chandler Memorial Premier 2’s top two sides when they took a narrow 26-18 win over Patumahoe Dave Redshaw Electrical. Patumahoe had a chance to steal the game in the last couple of moments but turned the ball over and Ardmore Marist went the length of the field to secure a win.

Bombay edged Karaka 23-22 while Manurewa Wise Property Management sneaked home against Pukekohe Franklin Long Roofing 21-20 in games that have a big impact on semifinals. Waiuku beat Papakura 22-15 in the other game of the weekend.

Te Kauwhata remained top of the Sid Marshall Shield Premier 3 table with a 20-5 win over Drury while Ardmore Marist completed a great day for the club with a 33-19 win over Maramarua.

Manurewa thumped Patumahoe 48-12 in Massey Cup U21 action in a statement win over the side nearest to them on the ladder. Pukekohe beat Bombay 19-10 in the other game.

Pukekohe took an important 26-15 win over the Karaka Razzlers in U85 action. Waiuku, Patumahoe Brady Construction and Papakura also picked up wins.