Counties Power Club Finals Round Up 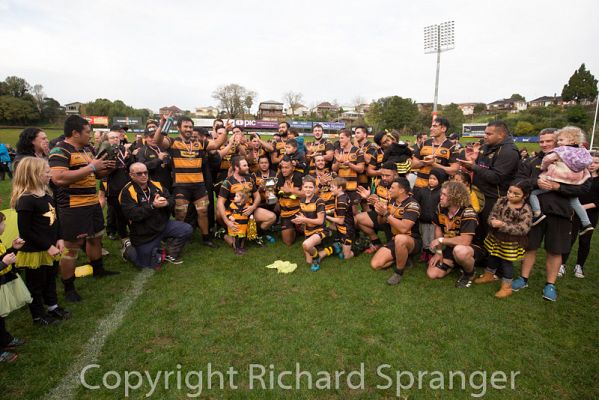 The competition minor premiers held their nerve after going to the break locked-up at 17-17 and eased away late in the match to extend their dynasty to a fourth title – the longest run of championships since Manurewa won six straight to start the 1990s.

“For us to go on and win the fourth – it almost meant more for this one than it did for some of the others, which is strange because they all meant a lot at the time,” coach Jeff Marr said.

“It is really satisfying.”

Bombay opened the scoring through an early penalty but it was the Karaka side that hit their straps quickest.

That put some heat on Marr’s side but they showed their championship quality in wrestling back the initiative.

“I thought we started well and had them under pressure but we only got three points for it,” Marr said. “They came straight back and scored a try and then got another one and we were 10-3 down. We worked to get back to 17-17 at halftime.

“We were in the fight there but we just hadn’t quite stuck to our game plan and did some things we hadn’t really worked on over the past six weeks.

“Once we got that message across and tightened up our defense a little we got into the game more.”

It marked a stunning day for the Bombay club as their Premier 2 side (Bombay Pokeno Bacon) overcame two lop-sided round robin scores against Karaka to claim the Bob Chandler Memorial trophy with a 10-7 win.

Marr admitted watching the Bombay Premier 2 side play inspired his own side.

“The Premier 2 team was a huge underdog win because Karaka has just owned that for the last three or four years. For the boys to come back from a 70 point hiding in the first round was awesome.

“We were out on the field doing our warm up and saw it unfold and it meant a lot to us to see that result come.”

Patumahoe enjoyed a terrific finals day too with their Patumahoe Albycon Ltd Under 21 side winning the Massey Cup thanks to a 17-10 victory over Karaka.

The Barney Te Tai-coached side had been the dominant team in the grade all season and, despite having to work hard in the semifinals and final, turned that success into silverware.

The Patumahoe Pak N Save Under 85kg side made it three-straight championships as they beat Karaka 19-0 in the championship final at Patumahoe Domain.

It completes a stunning triple for coach Brad Healy’s side – who went through last season undefeated. The other clubs in the grade were much improved in 2017 but Healy’s side saw off the challengers to complete the three-peat.

The Karaka club was devastated to go 0-4 on finals day but upon reflection should be incredibly proud to have teams make the final in all four senior grades.

Finals day capped a stunning club season – one described by many coaches as the best in recent times.

The semifinalists weren’t found until the final day of round robin with four of five games having playoff implications. Pukekohe Mitre 10, Onewhero Counties Bulk Haulage and Waiuku Brian James Contracting all became much tougher in the second round and closed the gap on the top four sides.

The season was littered with upsets and top quality rugby across all grades.

“At the end of the first round it almost looked like the top four was a done deal but some of the chasing teams really got a run going and to go down to the last round was awesome,” Marr said.

“I think the Counties competition is one of the strongest in the whole country.”