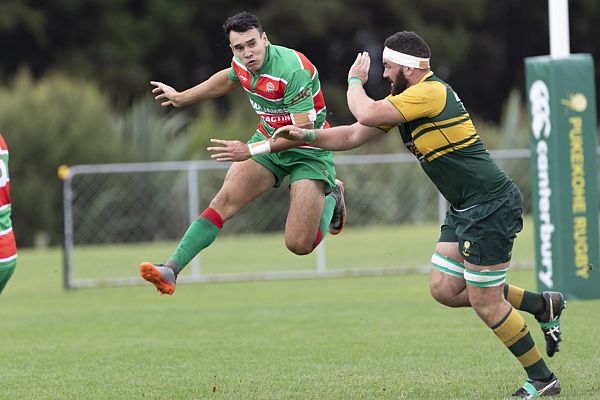 It was the fifth straight win for the home side, who move to the top of the Counties Manukau standings as a result, while it was the first time Patumahoe has tasted a loss in 2018.

“It was an excellent game of rugby,” Karaka coach Scott Penney said. “Patty came with a really good forward pack and really took it to us. They led at halftime, which was well-deserved.

“I don’t think that will be the end of Patty – I would say they will be at the top when we get to the business end of the competition.”

Reigning champions Bombay got back to winning ways with a 43-28 win over Papakura up the hill. The home side bagged six tries in the process while Papakura continued their improved performances this season, securing a four-try bonus point themselves.

“We are pretty frustrated more than anything else because we know we have been playing pretty well,” coach David Ross said. “We have been leading each of the games we’ve lost this year at halftime but we just seem to run out of steam in the second half. Whether that is a little luck here or there or injuries I’m not sure.

“So to get a win and actually play better in the second half than we did in the first is pretty pleasing.”

Pukekohe Mitre 10 Mega produced arguably their best performance of the season in beating Waiuku Brian James Contracting 35-19 at Colin Lawrie Fields to move back into a top four position on what is an extremely congested top half of the leaderboard.

“It was a good game. The first half was played at a pretty hectic pace,” Pukekohe coach Mark Price said.

“Waiuku came out fighting as they always do but I think credit to our boys – they absorbed a bit of pressure and got the job done.

Price was particularly happy with his forward pack.

“I felt we had a bit of dominance in the scrum but the lineouts we really struggled. I thought our forward pack really stood up especially at the pace the game was played at.”

“I was happy with another solid performance. It all came together and we put a game plan to work against Onewhero.

“We did a bit of analysis in their game against Patumahoe and identified some channels to hit. The game plan to take the game out to our flanks worked a treat.”

Winger Willie Tuala scored another two tries to remain atop the AS Wilcox Ltd Leaderboard – he has scored eight tries this season and leads teammate Joshua Tafili by one score.

In Massey Cup Under 21 action Patumahoe Albycon Ltd, Pukekohe and Karaka enjoyed victories while in the Under 85kg grade Pukekohe, Papakura and Patumahoe Pak N Save claimed wins.