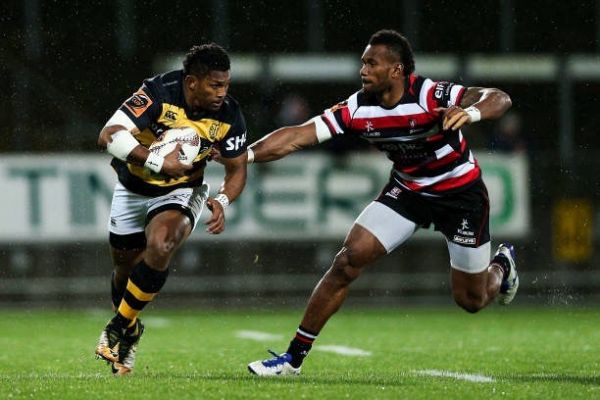 A heart-breaking try to the home side in the final minute has robbed the PIC Counties Manukau Steelers from a memorable away victory over Taranaki 27-30 at New Plymouth.

The PIC Steelers were ahead for much of the Mitre 10 Cup clash, producing an excellent performance from the forwards, a largely stout defence and some impressive individual efforts on a windy and cold night at Yarrows Stadium.

A penalty enabled the home side to push inside the red zone with the advantage of the strong breeze, and from the resulting drive, Hurricanes hooker Jimmy Riccitelli forced his way over for the game-winning try.

However there was much to admire from the PIC Steelers, chasing their first win over Taranaki in five years, with a number of young players stepping up in the absence of several experienced stars including injured Augustine Pulu, his co-captain Jimmy Tupou forced out with injury in the first half, and with Tim Nanai-Williams and Stephen Donald coming off the bench.

“It was hard to fault that performance really,” said Baden Kerr. “We largely stuck to the plan into the wind in the first half and player more in the second half. It was a heart-breaking loss.

“Our defence was awesome aside from a couple of errors which they punished us for.

“But we can take a lot from this game. It was a big step up from last week when we played poorly.”

After early penalties by both sides, big Fijian winger Tevita Nabura scored a superb try in his first start for the PC Steelers, with a late effort by All Black Waisake Naholo giving the home team the 10-11 halftime advantage.

The PIC Steelers stepped up the pace into the teeth of the strong wind, with Chiefs halfback Jonathan Taumateine, who was outstanding in his first start, scoring for the 17-11 lead.

With the front row all replaced, reserve hooker Joe Royal scored a stunning try from a Steelers turnover, strong run down the flank by Nabura and final flick pass from Taumateine, converted by Kerr for the 24-11 advantage.

Taranaki edged back when Charlie Ngatai took advantage of a poor Steelers clearance before a Kerr kick from a scrum penalty give the visitors the 27-18 lead with 15 minutes remaining.

However Naholo scored his second in the corner and despite some brave defence from the Steelers, the home side snuck home in the last minute.

The PIC Steelers, buoyed by the performance if not the result, head home for their next game when they host North Harbour at ECOLight Stadium on Thursday at 7.35pm.