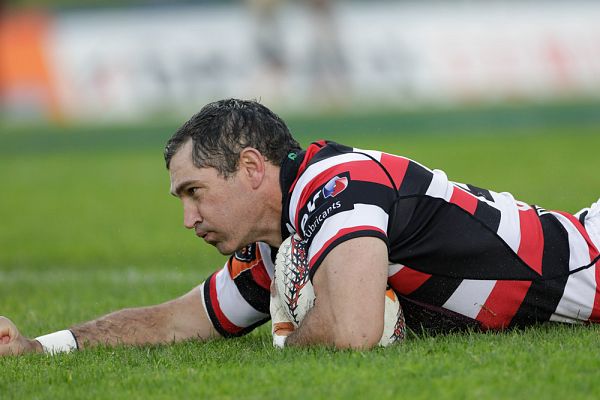 The game was less than 90 seconds old when Steelers wing Albert Nikoro scored.

The home side spread the ball wide from a lineout on halfway, then after some fine interplay between forwards and backs the Steelers switched play to the right side of the field where Nikoro was on hand to score.

Northland soon responded with a penalty via the boot of Peter Breen to narrow the deficit to two points.

Both sides were looking to spread the ball wide but with the rain and heavy conditions underfoot it meant scoring opportunities were far and few between.

In the 32nd minute, with the scorecard untroubled since the early stages of the game, the Steelers scored through local favourite Tim Nanai-Williams.

Once again it came off the back of a clean lineout win. Openside, Fotu Lokotui making an incisive break before offloading to Augustine Pulu who was bought down only two meters from the line. With the ball spread quickly to Nanai-Williams the try was inevitable.

A fine conversion to Baden Kerr near the sideline and the home side were leading 12-3.

The PIC Steelers looked to have taken that lead into halftime but having been penalised for running interference they allowed Breen to kick his second penalty of the half. A fine effort from 45 meters meant Breen and his Northland teammates were only down 12-6 at halftime.

The second half began with heavy rainfall and Northland on attack.

From a steady five-metre scrum the visitors spread the ball to reserve midfielder, Blake Hohaia who crashed over near the posts with his first touch of the match.

Breen added the extras and the Taniwha had the lead, 13-12.

The PIC Steelers regained the lead immediately after the restart when Northland were penalised. Kerr making no mistake with the penalty from 35 meters out.

Breen, who has not missed a kick all season, responded with a penalty of his own.

With the sun finally making an appearance both teams looked to break the game open. There were several fine passages of play but with the ball still slippery the final pass was proving difficult to catch.

The Steelers forwards then decided to own proceedings and started to dominate territory and possession. Trapping Northland in their '22 the Steelers were also dominating the breakdown. After a clever steal by Lokotiu the forwards relinquished the ball to their backs. The ball made its way to Stephen Donald and Waiuku's favourite son had the try.

Northland tried to regain the lead but staunch Steelers defence was the order of the day.