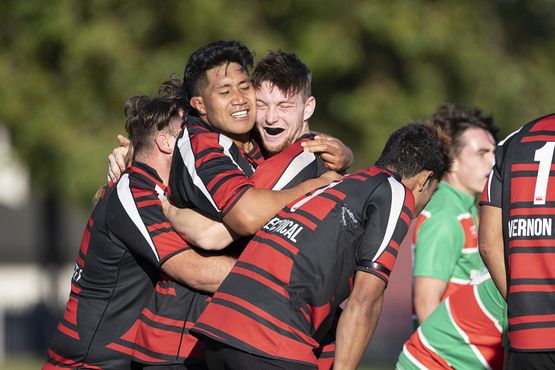 Papakura picked up their first win of the McNamara Cup season Saturday as they claimed a 25-12 win over Waiuku Brian James Contracting at Massey Park.

The home side went super close before losing in injury time last week to Onewhero but never looked threatened in winning the Counties Power Game of the Week.

“We are rapt to get the win,” co-coach Shaun Clotworthy said. “It will do wonders for our confidence. The boys have been working hard and deserved it. We are pleased for them.

“We started average – Waiuku came out and probably dominated us for the first 20-30 minutes but we stuck in there and then in the end stuck to our structures and got on top and started believing in ourselves and came away with a nice win.”

Papakura have missed some key personnel through the opening rounds but got a massive boost with representative front rowers Sam Aiono and Howard Sililoto getting back to help them beat Waiuku on the weekend.

“They had their first full game for us and gave our scrum a real boost and forward pack a real platform to work from.”

Manurewa Kidd Contracting handed Pukekohe Mitre 10 Mega their first defeat of the season and lifted the Counties Power Cup with a 36-20 win at Mountfort Park.

The home side picked up a four-try bonus point in the win as well and cemented their spot in the top four. It also is a fourth successive win in a row for Jeremy Clark’s side.

“We are improving week in and week out and from a coach’s point of view that is all you want,” Clark said of his side.
“It was game we knew we had to lift. The physicality was good in the forwards and we really lifted at training during the week with a lot of contact to get them ready for a big battle on Saturday.

“To our credit I thought our forwards really stood up.”

Clark was reluctant to nominate individuals for praise, stating that his side really played well across the park.

“It is hard to pick one out – it was more of a team effort. From 1-22 it was outstanding. The starting team was awesome and the bench came on and really did their job.”

Karaka collected their first win of the season after they stunned Bombay 37-29 in a high scoring affair at Bombay Domain.

The visitors have been threatening to put a win on the board for the past couple of weeks and finally opened their account for 2019 in a stylish manner.

“It has been a hard first four weeks to now have a W in there,” Penney said. “The boys have stuck in there. It is no secret that we are really struggling with injuries but you just have to get on with it.

“We try to keep our 1pm team and our premiers as strong as we can so to have a W up the hill twice – we won both games – is pleasing.

“We didn’t move away from their forwards. We spoke about trying to move them around early but our forwards really stood up.

“Our boys stuck to task – in the last 20 minutes we let a few penalties in but that is all learning for us.”

It was a scrappy game from both sides with no real flow to it but Ardmore Marist scored late to seal a narrow win.

“It was a tight tussle – it could have gone either way to be honest,” Ardmore Marist coach Doug Sanft said. “It was full of errors – we couldn’t hold the ball and build phases but the same goes with Patty.

“We scored in the last five minutes to come away with the win.

“We were sloppy, forcing offloads when it wasn’t on and running out – which is hard to explain.

“The scrums were a bit of a lottery.

“It is always the case – it is better to win ugly than a good loss.”

Waiuku was the only side to reverse the fortunes of their premier teams after they beat Papakura in Bob Chandler Memorial Premier Reserve action. Other winners were Manurewa, Ardmore Marist and Karaka.

Manurewa, Ardmore Marist and Papakura women’s teams enjoyed wins but it was a tough result for Patumahoe and Drury.