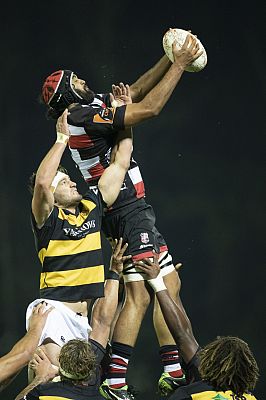 Close but no cigar again for PIC Counties Manukau Steelers

For the third straight game, the PIC Counties Manukau Steelers have endured a bonus point loss after a 26-19 scoreline at Navigation Homes Stadium in Pukekohe.

And as with the two previous losses, they finished the game hot on attack looking for a result, but without fortune.

The Steelers shared the try-scoring with the Ranfurly Shield holders with three each while the boot of Taranaki fullback Beaudein Waaka proved the difference.

After the visitors made a fast start with an early Lachlan Boshier try, the Steelers fought back and while often forced to defend, they proved up to the challenge. They took the lead at 10 minutes when big prop Kalolo Tuiloma powered over a strong run from halfback Te Aihe Toma and a lineout drive.

They extended the advantage with a superb try by left wing Tevita Nabura. Debutant Savelio Ropati made ground after a dropped kick by Taranaki, before Nigel Ah Wong’s crossfield kick was collected by Nabura who used his speed to score.

The home side led 12-8 at the break but had to spend much of the second half defending which they did resolutely.

Two Waaka penalties saw Taranaki in front for the first time 14-12 before the fullback scored for the 19-12 lead.

The Steelers hung in the fight until they got their chance with a wide pass on attack from Orbyn leger found Toni Pulu in space. He pushed off his opposite and with a mix of power and speed the Brumbies-bound wing beat off six defenders to score under the posts with the conversion bringing the scores to 19-19.

No sooner had they kicked off but the home side lost the ball at the breakdown with Waaka strolling over unopposed.

Again the Steelers fought back with strong driving play, but the visitors managed to hold them up in a frantic drive for a final try.

Captain Sam Henwood was extraordinary in defence, although there is concern after he came off following a head clash late in the game and while the backs worked so hard, they were cramped by a very aggressive Taranaki defensive line.

There is no respite for the Steelers who head to Hawkes Bay on Sunday.