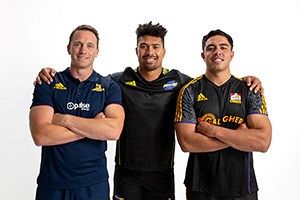 Checking in on your mates and raising awareness about mental wellbeing are the focus of Investec Super Rugby's HeadFirst Round this week.

The themed round is driven by New Zealand Rugby’s (NZR) wellbeing programme, HeadFirst, which supports players, their families and the rugby community to develop Fit minds for tough times.

While this year’s HeadFirst Round has been on the calendar for some time, the outpouring of emotion from all around New Zealand after the tragic events in Christchurch further remind us of the importance of checking in with our mates and looking after each other.

NZR Education and Wellbeing Manager, Nathan Price, said the 2019 campaign built on last year’s ‘Bubble Round’, which encouraged people to burst the bubble on mental health and talk more openly about life's ups and downs.

“This year’s HeadFirst Round takes this idea one step further and aims to raise awareness about some of the barriers to ‘having the conversation’, mostly awkwardness,” Price said.

“There’s sometimes a stigma around talking about our mental health and asking others how they are, especially for young people. People are often worried they’ll say the wrong thing, and this can be a massive barrier to having genuine conversations about how we’re feeling.

“By using humour, the campaign addresses this and shows that although it can be awkward, it’s important to take time to check in with your mates and ask them how they really are.”

Players from each of New Zealand’s Super Rugby clubs feature prominently in the 2019 campaign video and were keen to support HeadFirst:

The HeadFirst Round kicks off this Friday, 22 March when the Blues play the Highlanders at Eden Park, followed by the Hurricanes match against the Stormers at Westpac Stadium on Saturday.

The Crusaders are away to the Waratahs on Saturday night, while the Chiefs play the Bulls in South Africa on Sunday morning (NZT).

Among those putting their weight behind the HeadFirst Round are HeadFirst Ambassadors Black Ferns Sevens Player Ruby Tui, All Black Nehe Milner-Skudder, and former All Black Keven Mealamu.

“You’d ask a mate how they’re going if they pulled a muscle – so checking in and asking how they’re doing is no different,” said Tui. “You might notice small changes in their behaviour, or that they seem a bit off.

“Checking in can be as simple as asking ‘how are you?’ or taking a them out for coffee. For me, the key thing is about being genuine and letting that person know you’re there when they’re ready to share.”

Price said it may seem simple but knowing how to check if someone is ok is an important part of being a good mate.

NOTE : Anyone seeking advice on mental health or wellbeing, or experiencing stress, anxiety or depression, can free call or text 1737 to chat to a trained professional