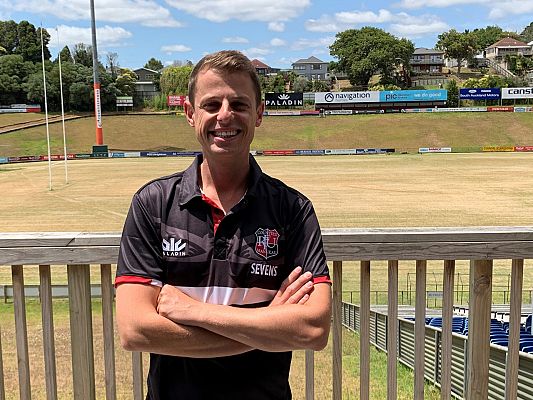 Aaron Lawton was recently appointed as the general manager of the Counties Manukau Rugby Football Union. We caught up with him two weeks into the job to find out more about our newest recruit.

Aaron was born in Kerang (a tiny town in country Victoria) Australia but is an Auckland boy through and through, having moved to New Zealand as a one-year-old. He’s got two brothers, a Kiwi mum and an Aussie dad – but we won’t hold that against him.

Growing up in Mt Roskill, Aaron’s childhood was one in which sport took centre stage. As a youngster he tried his hand at everything from cricket, league, football, golf, ice hockey and, of course, rugby.

“I have always been incredibly passionate about sport and was always playing something as a kid,” he said.

“But it probably wasn’t until high school or so that I realised I wasn’t all that good. That’s why I moved into sports journalism. Some write, and some play – as they say!”

After high school, Aaron studied journalism and communications at AUT and soon found work as a sports writer.

“In the early days I was lucky enough to cover All Blacks tests for their website and Blues and Chiefs games as well. I’ve always loved my rugby and it was a real highlight to get that experience so early in my career,” he said.

“From there I got a job as a staff writer for Fairfax where I ended up working initially for the Sunday News and then also the Sunday Star-Times. During that time I covered a variety of sports as well as the Cricket World Cup in India and also the 2011 Commonwealth Games there too. I had some great experiences.”

Aaron says while he loved writing about sport, the plan had always been to one day work in sport.

That opportunity came in January of 2016 when he joined the New Zealand Warriors’ executive team as the club’s fan engagement manager not long after returning home to New Zealand from America where he’d moved with his wife Sarah while studying for his master’s degree at the University of Southern California.

“I had four wonderful years with the Warriors. Basically, I was responsible for the fan side of the business so everything from marketing to ticketing, communications and memberships,” he added.

“It was a job that had its challenges but I learnt so much and I definitely think it has positioned me well for this next phase of my career here at Counties Manukau.”

For Aaron, the decision to put his hand up for the general manager’s role was a “no-brainer”.

“I couldn’t be more excited about being here. This is such a proud provincial union with a rich history and it’s a real privilege to be entrusted with the responsibility of guiding it into 2020 and beyond.

“A big thing for me is ensuring we have great relationships with our clubs and are doing everything we can to really grow rugby in our region.

“Then, of course, at the Mitre 10 Cup level it’s about having a winning Steelers team our region can be proud of and get behind.

“I think the appointment of Tai Lavea is going to be huge for this team and it’s a new era here at Counties Manukau that I hope our fans are really excited about.”

Away from work, Aaron has his hands full as a father to two young kids in Charlie (4) and Zoe (2) and says, when time allows, he loves to get out on the golf course.