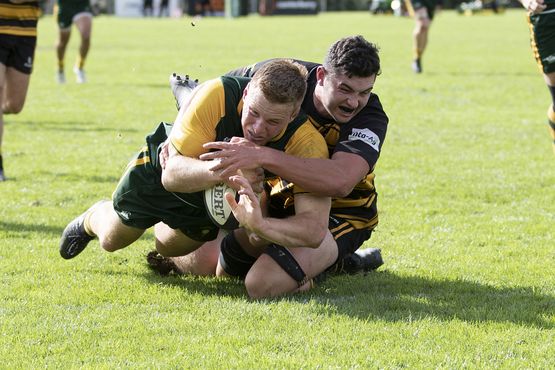 Defending champions Ardmore Marist South Auckland Motors bounced back from their shock loss to Pukekohe last week to beat Karaka 43-42 in a close affair at Karaka Sports Complex on Saturday.

The home side has really struggled with numbers and player availability so far this season but they can take some comfort in going so close to beating one of the competition’s best sides.

Doug Sanft’s side picked up seven tries in the win and he was particularly happy to take the spoils.

“I thought Karaka played well,” Sanft said. “I know they are desperate for a win and they took it to us. They had a near full strength side and had a couple of Super Rugby boys playing that boosted them.

“It was more of an attacking game so whenever someone had the ball it seemed like they were about to score.”

Sanft was pleased with how his side responded to last week’s loss to Pukekohe and he actually thinks the side took a step forward after back-to-back tight games having opened the season with some pretty one-sided results.

“I knew our set piece was one of our weaknesses last week so we worked on that and we got a lot of that sorted,” Sanft added.

“We are still trying to learn about ourselves at the moment but in terms of going forward we are happy with where we are at.”

Karaka have now lost back-to-back matches against last year’s finalists and could very easily have picked up wins if the bounce of the ball had gone their way.

With wins over the other leading teams in the competition, Pukekohe have clearly established themselves as the form team of the opening round.

“Bombay made it a dogfight and really brought it to us,” coach Sean Polwart said. “They matched us really well and it was a hell of a battle.

“We got up early and just held onto the lead. Our boys need to be a little more clinical at times to try and put teams away but Bombay are a hell of a side and we will get a good challenge from them again in the next round.”

Pukekohe have built their success around a strong defensive game that all the big sides have struggled to penetrate through the opening quarter of the season.

“It is always a work in progress but for the most part the guys are showing attitude, getting up off the ground and working and knowing that if you can back your defense and hold teams out you will eventually get reward,” Polwart added.

Manurewa Kidd Contracting extended their win-streak to three matches as they dismantled Waiuku Brian James Contracting 59-5 to move into the top four in what has become a logjam atop the McNamara Cup standings.

Manurewa stormed out to an early lead and managed to score nine tries in the win.

“It was a tough one,” coach Jeremy Clark said. “It was a stop-start affair to start off with and trying to find cohesion and get the flow on took a while to get started.

“Credit to Waiuku – they played the full 80 and we were just pleased to come away with the points.

“I thought our forwards played quite well in patches. They laid the platform and the backs finished off some classy plays.

“We are steadily getting better and we have a big one next week against Puke so we want to keep improving.”

Onewhero Silver Fern Marquees collected a break-through 35-34 win over Papakura Ray White to prove their recent run of close results is a result of improved competitiveness.

The home side ran in four tries to secure a bonus point after trailing a spirited Papakura side by a narrow halftime margin.

After some narrow wins against some of the more fancied sides in the competition in recent weeks Onewhero managed to find themselves in the winner’s column in a performance that could well spur them on to bigger things.

Papakura scored four tries as well to ensure they left the match with a couple of competition points.

Patumahoe Dave Redshaw Electrical continued their unbeaten start to the 2019 season with a 34-18 win over Weymouth at Patumahoe Domain in Bob Chandler Memorial Premier 2 action.

Other winners in the grade were Manurewa, Ardmore Marist and Pukekohe.

Manurewa took a 28-17 win over Patumahoe in Under 21 play. Defending champs Pukekohe collected a 42-10 win over Bombay.

Manurewa women enjoyed a win over East Coast Bays while Pukekohe and Patumahoe both suffered opening round losses in their competitions.