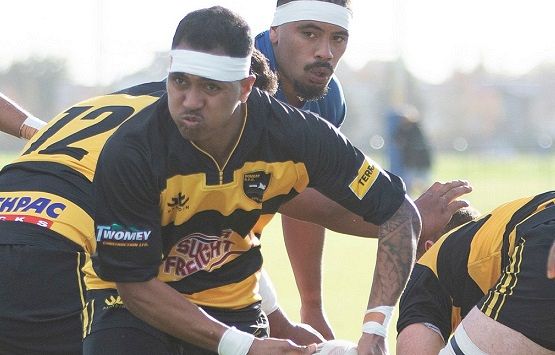 Bombay secured their first McNamara Cup win Saturday as they beat Papakura 37-20 in their round three match at Bombay Domain.

Sam Aiono’s side went back and forth with the visitors in the first spell before kicking clear in the second half.

“The boys dropped their standards but that was because Papakura put us under a lot of pressure,” Aiono explained.

“We scored some good tries but there was also some of the worst rugby we have played all season as well.

“Papakura turned up to play and they made it hard for us.”

Aiono said he was pleased with a couple of aspects of his side’s performance but knows they will need to do a lot better in other areas ahead of the clash with the unbeaten Patumahoe next week.

“I was happy with our defense. We focused a lot on defense after playing Manurewa and Karaka and I was pretty pleased with how that worked.”

The win lifts Bombay up to fifth on the table.

Manurewa remained unbeaten after they edged Karaka 36-29 in a pulsating game at Karaka Sports Complex.

In a replay of last year’s semi-final, the two sides traded blows throughout before Manurewa took control of the game in the final 20 minutes.

Karaka kicked a late penalty to ensure they claimed a bonus point.

Patumahoe remain atop the standings for another week after they dismantled Ardmore Marist at Bruce Pulman Park in a 69-5 win to close the partial first round.

Coach Brad Healy made some changes to his line-up for the game and got some good performances to further underly the club’s depth at present.

Ardmore Marist dominated the opening 15 minutes of the game but were unable to stay with Patumahoe once they were able to gain momentum.

“The scoreboard definitely didn’t speak the true story of the game to be honest,” Healy said. “The first half was pretty good but the second half we started slow, but these games can be like that.

“Our work-rate was good – we looked hungry.

“The boys will be happy with the win and then we will regroup Tuesday and look forward to Bombay at home next week.”

Max East and Dylan Leckner were superb for the visitors.

Pukekohe made it two big wins in succession as they hammered Weymouth 72-0 at Colin Lawrie Fields and moved into the top four as a result.

It was a dominant performance from Michael Porter’s side, who led from the opening moments and closed out a brilliant day by keeping the visitors scoreless.

“I thought we played well in the first half – we showed good patience and finished off our opportunities well,” Porter said.

“The second half got a bit messy. Full credit to Weymouth though – they didn’t go away for the full 80 minutes, and they will upset someone this year.

“We now turned our attention to Manurewa, who we know will be a good battle.”

Patumahoe’s Bob Chandler Cup side enjoyed a 48-12 win over Sid Marshall Shield outfit Puni but Drury produced arguably the performance of the weekend to roll the Bombay Bob Chandler side 18-7 at Bombay Domain.

Waiuku picked up a 39-21 win over Te Kohanga in the Sid Marshall Shield while Te Kauwhata had to work hard to beat Patumahoe 12-3.

Manurewa secured a 26-19 win over Tuakau at Tuakau.

In Massey Cup U21 Karaka continued their strong start to the campaign with a convincing 26-0 win over reigning champions Papakura while Manurewa claimed a 31-15 win over Pukekohe.

Onewhero scored a narrow 18-16 win over the in-form Waiuku side in U85kg action.

Karaka beat Beachlands Maraetai 21-8 in the Counties Energy Game of the Week while Patumahoe bounced back to beat Pukekohe 27-13.

Papakura picked a 24-15 win over Bombay.

In Women’s Premier action Manurewa extended their winning streak to three games as they beat Ponsonby 23-17 while Papakura claimed an impressive 27-10 win over Grammar Tech.

Patumahoe went down to Ponsonby 66-0 in their first match in the Women’s 10-a-side competition while Ardmore Marist lost to Albany Barbarians 48-15. Manurewa proved too good for Papakura with a 55-0 win.