Bonus Point Win sees Pukekohe through to the Semi-Finals 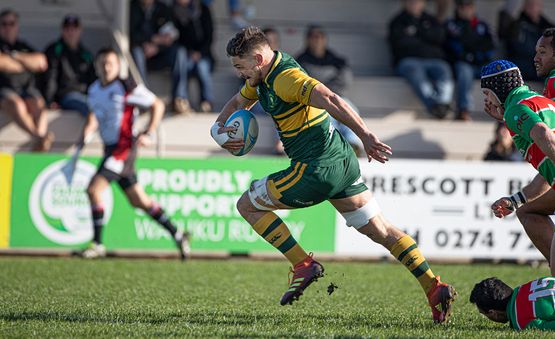 A final round bonus point win at Rugby Park in Waiuku has handed Pukekohe Mitre 10 Mega the final semi-final spot in the McNamara Cup.

Sean Polwart’s side endured a torrid opening half before scoring the fourth try in the second half to earn a 35-29 win over Waiuku Brian James Contracting.

“We are rapt,” Polwart said. “Four weeks ago we thought it was more about finishing the season the right way and we weren’t too sure we had a chance [to make the semi-finals]. It was about one game at a time and we gave ourselves a chance.

“The boys went out and played a good game, we scored some good tries and Waiuku gave us a good challenge – it would have been a bloody good game to watch.

“We knew we needed to get the four tries but I think the guys forgot that the most important thing was to win the game first and foremost.

“We scored a good early try and Waiuku took control of the game after that but we did create a lot of opportunities.

“The discussion was that we needed to settle in and I think the boys had been overthinking the outcome before the process had even happened.

“We got settled in and the ball stuck and we scored some good tries when the game opened up.”

Pukekohe will travel to Bruce Pulman Park to tackle Ardmore Marist South Auckland Motors in one of next weekend’s semi-finals – the first time Pukekohe has played knock-out rugby since 2016.

Patumahoe Troydon Patumahoe Hotel ticked off their part of the equation to make the semi-finals in beating Papakura Ray White 36-17 but they got bad news from Waiuku when they got off Massey Park.

Reon Graham’s side grabbed an early lead and never looked threatened as they piled on six tries to earn the bonus-point win they needed.

Injuries certainly hampered Patumahoe’s charge this season and last year’s runners-up will rue second round losses to Onewhero and Waiuku that ultimately saw them miss out.

Ardmore Marist finished a dominant round robin by beating Manurewa Kidd Contracting 24-20 to win the Challenge Cup and ensure the Counties Power Cup was secured over the summer.

With a home semi-final already locked in place there wasn’t a lot for the home side to get from the game other than to create some momentum heading into the knock-out games.

“We knew what Rewa was going to bring and that is physicality,” Ardmore Marist coach Doug Sanft said. “They had a six-one split with forwards on the bench so they were really coming after us up front.

I am pretty happy getting a bit of momentum going into the semi-finals.”

In the end Ardmore Marist prevailed and finished the round robin having dropped just two games all season.

“Pretty pleased – it has been a bit of an up and down season,” Sanft added. “Injuries were a big issue for us so we had to rely on our depth and I am pretty pleased about that.

“It is a bit similar to last season with the win and loss record – we lost two games last year as well.”

Karaka finished their season on a high with a 81-7 thrashing of Onewhero up the hill.

The visitors collected 13 tries while Larenz Tupaea-Thomsen bagged a personal haul of 19 points that means he finishes the round robin as the competition’s leading point-scorer – topping the AS Wilcox leaderboard with 130 points.

Ardmore Marist edged Manurewa Wise Property Management 38-33 to ensure they finished the round robin on a high note and secure the Don Shuker Cup in Premier 2.

Like their premier 1 side, Ardmore Marist enter the knock-out stage as the dominant top side in the grade and will have a home semi-final.

Patumahoe Dave Redshaw Electrical thumped Papakura 53-14 and will host a semifinal against Manurewa next weekend.

Bombay eased to a 31-12 win over Weymouth to pip Karaka for fourth spot. Pukekohe thrashed Waiuku 60-13 in a dead rubber match.

Te Kauwhata had a bye this weekend but had done enough to win the Bill Marsh Cup for topping Premier 3 at the end of the round robin. They will meet Ardmore Marist in next weekend’s semi-final.

Maramarua will go through as second qualifiers after picking up a 32-15 win over Onewhero and will face Drury in the semi-finals.

Pukekohe thrashed Waiuku 52-5 in Massey Cup U21 action and will travel to Patumahoe next weekend to face Patumahoe Albycon Ltd in the semi-finals. Manurewa topped the round robin standings and will face Bombay in the other semi.

Manurewa claimed a comfortable 39-17 win over Ardmore Marist in women’s action while Patumahoe earned an impressive 31-20 victory over Drury. Papakura and Weymouth lost their respective fixtures.