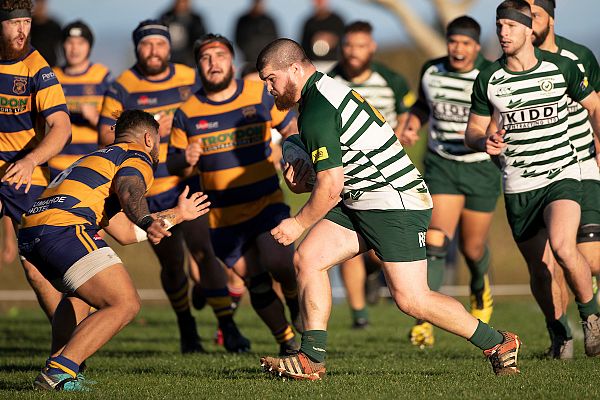 They also took over as Counties Power Cup holders – the first time the trophy has changed hands since very early in the season.

Having been desperately unlucky the previous week Karaka channelled a clutch performance when it was needed most.

They jumped out to a 25-12 lead by halftime and were smart enough to close the game out and secure a crucial five points.

“I am delighted with that result,” coach Scott Penney said.

“We knew that they liked to take the game wide so we decided to try and play a bit tighter, particularly with the players that we have available to us at the moment.

“That worked really well and I am just really proud of the boys.”

Not only did Karaka get the win they needed to stay in the hunt but they picked up a four-try bonus point, which could prove decisive when the last games are completed.

Defending champions Bombay did their part to hold onto the fourth spot that Karaka have in their sights. Jeff Marr’s side had to work hard to get past Waiuku Brian James Contracting 35-22 at Bombay Domain.

“There was a lot of stuff we were happy with,” Marr said. “It was not a complete performance though and we let ourselves down a bit. We let Waiuku back into the game after we had a handy lead over them.

“It was good to get the five points against them. The way Waiuku have been playing the last few weeks it was a game we had to play pretty well to get over top of them.

“We did that but still a few work-ons for us.”

Ki Anufe kicked four conversions to stay at the top of the AS Wilcox Leaderboard.

The two sides are likely to meet each other in a semifinal so the next two weeks will determine who gets to play host.

“It was the old story of a game of two halves,” Patumahoe coach Reon Graham said. “They came out firing and we let them do what we aimed not to do and that was allow their backs to run and they scored three nice tries.

“We bounced back and scored two tries to our forwards, which kept us in it at halftime.

“Then we came out in the second half and tidied things up and managed to get a couple of nice tries of our own.”

While their position on the ladder doesn’t show a heap of improvement every coach in the competition knows Papakura have made giant strides in 2018 and will be a serious threat next season.

Maramarua took a key 17-12 win over Te Kauwhata in Premier 3 action. Karaka edged Puni 41-38 in a high scoring affair while Weymouth continued their unbeaten run with a 22-10 win over Drury.

Papakura Ray White claimed a narrow 26-23 win over Pukekohe in Under 85kg play to protect second place on the ladder. Leaders Patumahoe Pak N Save eased to a 29-5 win over Waiuku while Bombay were too good for Onewhero 29-20.