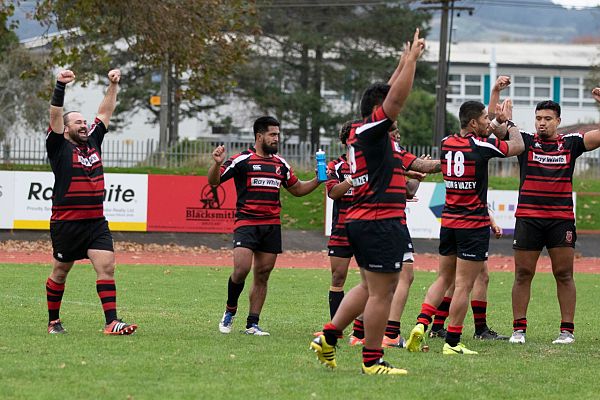 Papakura Ray White got their first win of the season Saturday as they knocked over neighbours Karaka 28-25 at Massey Park.

In doing so they picked up a four-try bonus point as well to lift themselves off the bottom of the ladder.

Papakura had been threatening to beat one of the top sides all season and went very close to beating both Waiuku and Pukekohe earlier in the season.

“It was a long time coming,” coach Gavin Giles said. “We had a bit of heart-break a few weeks ago when we lost to Puke in injury time and we were close to Waiuku. We have been working hard for three years now to try and get a win against one of the top sides.

“So it was relief more than anything and a really good result for the boys.”

Giles can see this result having a lasting impression on his team as well.

“It has to be [a confidence booster],” Giles said. “The win was elusive but now the guys understand what is needed to get there. Rugby is an 80 minute game so you can’t switch off at all.

“Going forward they will take a lot of confidence out of this.”

Onewhero raced out to a big halftime lead, scoring all of their points in the first 40 minutes. Pukekohe came storming back in the second spell but couldn’t do enough to win the game.

“We stuck to our game plan,” coach Lesley Vainikolo said. “Pukekohe is a big team with big forwards and part of our plan was to move them around. The more we moved them around the more tired they would get.

“We also concentrated on doing the little things well.”

The win was extremely important for Onewhero as it keeps them in touch with the top four. They are seven points off fourth place at the end of the first round.

“We worked hard in the first block of games and again in the second block,” Vainikolo explained. “If we start concentrating on the little things and cut out some mistakes we will trouble teams.”

Both sides collected four-try bonus points in the match.

The home side started with a hiss and a roar, racing out to a 31-0 lead in the first half. Patumahoe had no answer to Doug Sanft’s side’s onslaught.

Manurewa Kidd Contracting kept pace with Ardmore Marist however as they racked up 12 tries in their 74-12 hiding of Waiuku Brian James Contracting.

The duo of Josh Tafili (13) and Willie Tuala (12) top the AS Wilcox leaderboard with tries scored in the first round – well clear of the chasing pack.

In premier 3 action competition leaders Weymouth nearly registered the century as they belted Puni 98-8. Te Kauwhata enjoyed a lopsided result as well - a 61-12 win over Drury while Maramarua beat Karaka 26-22 in a close match.

Karaka got the better of Ardmore Marist Ross Roof Group 39-36 in a close encounter in Massey Cup Under 21 action. Pukekohe ran out 49-21 winners over Papakura Ray White while Bombay thrashed Manurewa 52-0.

In Under 85kg action Papakura Ray White beat Pukekohe 27-24 in a thrilling match while Onewhero Bottle’O Tuakau enjoyed a 14-0 win over Bombay Lincoln Farms. Patumahoe Pak N Save collected a 41-3 win over Waiuku.