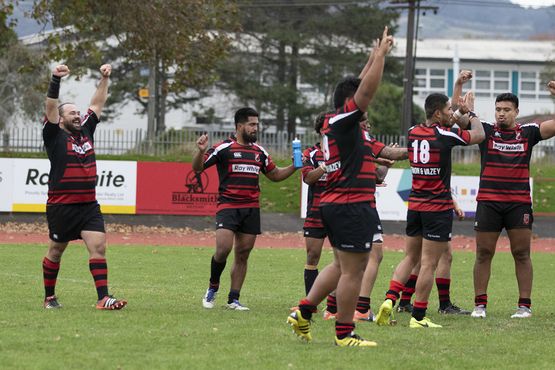 Papakura Ray White will look to use a new-found confidence in their performances to help them knock over Manurewa Kidd Contracting in this weekend’s Counties Power Game of the Week.

Fresh off a stunning 31-24 win over top four outfit Bombay the Sione Sione and Shaun Clotworthy-coached Papakura side will be out to prove last week was no fluke.

“A lot of it is the top 10 percent,” Clotworthy said. “It is just the mental side – these guys have the ability but maybe not quite the belief in themselves.

“They should take a lot of heart from Saturday because they played well and were really competitive.

“We have got a few guys in that [Counties Manukau Steelers] wider training squad now so they are going to bring some extra skills back to us and then we have some younger guys in the squad too.

“They are just starting to believe they can do it and are finding out what premier rugby is all about.”

Manurewa are coming off the bye and went on a winning run that took them to the top of the standings momentarily in the corresponding game in the first round. They are in the middle of a tight battle that includes Ardmore Marist, Bombay, Pukekohe, Karaka and Patumahoe with six sides scrapping for four semi-final berths.

“It will be a tough game and we will just try to build on last week and work on what went wrong against Bombay,” Clotworthy explained.

“We played Manurewa in the first round and we were quite competitive with them in the first half anyway. We hold no fears – they are a good side – but we will go out and do what we will try and do.”

Manurewa coach Jeremy Clark knew Papakura had it in them to trouble good sides but he was impressed with what they did to Bombay.

“They have made the competition stand up take notice,” Clark said.

“It will be a titanic battle this week and that is a good thing. It is at home so it is in front of our family and friends so we will be pumped up to get the result.”

Clark knows his side will be tested physically but is a little unsure how Papakura will back up after such a strong showing.

“Expect the unexpected I guess,” Clark said. Their set piece is good and so the onus is on our tight five to have a big game. We are going to have to perform up front.”

In other matches Patumahoe Troydon Patumahoe Hotel faces a must-win clash with neighbours Pukekohe Mitre 10 Mega at Patumahoe Domain. The occasion doubles as Old Boys Day where there will be more than a few past players that have represented both clubs in attendance. Elsewhere top-of-the-table Ardmore Marist South Auckland Motors hosts Waiuku Brian James Contracting at Bruce Pulman Park while Onewhero Silver Fern Marquees travels to Bombay.