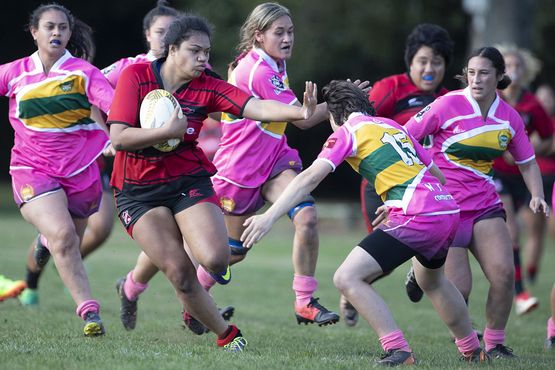 Ardmore Marist South Auckland Motors completed the first round of the McNamara Cup in emphatic style by lifting the Counties Power Cup and moving back to the top of the standings with a 34-25 win over Manurewa Kidd Contracting.

The home side shot out at an early lead before Manurewa got themselves back into the game in the second spell but Doug Sanft’s side withstood the fightback to earn the points.

“It was a good battle – for both teams it was about physicality,” Sanft said. “I think it was more around execution as well.

“We started well with a few tries in the first 10 minutes but then some errors started creeping into our game and we allowed Manurewa back into the game.

“They are a quality side.”

Having now played every side in the competition, Sanft has been able to assess which sides look like the ones to beat but he feels the way this season has progressed anyone is still capable.

“To be honest I think every team has improved,” he explained. “The first three or four rounds it looked like a top four or five but now, taking into account the Waiuku v Puke game, we have to be up for every game.”

Waiuku Brian James Contracting made it two wins on the bounce after they produced arguably the upset of the season so far as they beat Pukekohe Mitre 10 Mega 20-19 in a thrilling game at Colin Lawrie Fields.

A week after celebrating the club’s 125th anniversary Waiuku turned in a vintage performance against one of the competition heavyweights, with a long-range penalty goal sealing victory on the stroke of fulltime.

“Definitely happy with the result,” coach Lawrence Lawrence said. “It was a real good game of rugby – we sort of traded points try for try and Pukekohe always had the lead so for us it was about being able to stay in the contest and give ourselves a chance at some stage. Then when we had the chance we were good enough to win it at the end.”

The one-point loss means Pukekohe blew a golden opportunity to move to the top of the standings at the completion of the first round.

Karaka kept pace with the leading sides and continued their good run of form by beating Onewhero Silver Fern Marquees 36-32 in a high scoring game at Karaka Sports Complex.

After a disastrous start to the season, thanks largely to injury and unavailability, Karaka have proven to be right up there with the best sides in recent weeks.

“It was closely fought in the end. We got out to 26-7 lead at halftime and were looking quite comfortable and then just a lapse in concentration and some bad decisions by us let them back into the game,” Karaka coach Scott Penney explained.

“Credit to them they played extremely well and we had to really work for it in that second half.
“They just kept going and going.”

Patumahoe Troydon Patumahoe Hotel kept pace with the top four on the back of a 31-22 win over Papakura Ray White at Patumahoe Domain.

In securing the bonus-point win Patumahoe avoided slipping up in the banana skin game against an improved Papakura outfit.

“I think we went fairly well – Papakura at home are physically very strong and willing up front,” assistant coach BJ Moloney said. “They started quite well and we were a bit scratchy but I think five points is all you can hope for at the end of the day and that is what we got so we are quite happy.

“I think there are a lot of teams at the bottom end of the table that can tip over anyone on the table as we saw on the weekend with Waiuku tipping over Pukekohe. Everyone has to be on their toes in this comp.

“We are still sitting in fifth and it is going to be very tough to get to the top of the table at the end of the round.”

Ardmore Marist, Manurewa, Pukekohe and Bombay hold top four positions at the completion of the first round with Patumahoe and Karaka snapping at their heels.

Ardmore Marist fired a scary warning to the rest of the Bob Chandler Memorial Premier 2 sides when they belted Manurewa Wise Property Management 60-17 to remain top of the standings. Patumahoe Dave Redshaw Electrical accounted for Papakura 64-12 while Pukekohe Franklin Long Roofing beat Waiuku 40-19 and Weymouth proved too good for Bombay 34-27.

Manurewa Carter’s Tyre Service racked up the century for the second time this season as they thrashed Waiuku 116-0 in Massey Cup Under 21 action. Patumahoe beat Pukekohe 21-10 to stay second on the ladder.

Manurewa and Ardmore Marist women enjoyed wins while Papakura beat Drury 27-19. Weymouth and Patumahoe went down in their respective fixtures.