Pukekohe upset defending champions, Bombay moves to the top of the table. 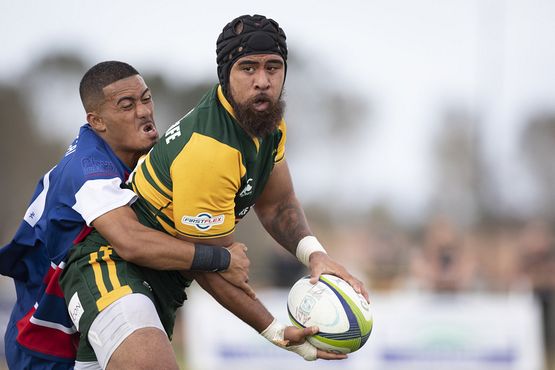 Pukekohe Mitre 10 Mega produced the performance of the season to knock over the defending champion Ardmore Marist South Auckland Motors 22-20 at Bruce Pulman Park on Saturday.

In doing so they retained the Counties Power Cup and joined Bombay as the only unbeaten sides left in the McNamara Cup.

“We improved and that was the key,” coach Sean Polwart said. “We talked about our discipline last week and how that let us down and we made some improvements there. I think our set piece was pretty solid and we were able to scrum and lineout well. Our attacking shape looked good at times too.”

The win means Pukekohe has now beaten both of last season’s finalists in successive weeks.

“If you watched our game – and I said this to the guys after the game – we can be far more clinical and composed in the key moments and I think that’s holding us back from being a lot better.

It is just learning curves for guys playing in these big games, which they probably haven’t had in the last couple of years.

“Once we start doing that I think we will see more improvements.”

They will get a chance to show that next week when they run into the other unbeaten side in Bombay.

Jeff Marr’s side moves to the top of the standings with their fourth straight win but he admits his side had to work really hard to beat Waiuku.

“They had a big loss the week before and they came out wanting prove something and they did just that. They really took it to us and stayed in the fight for the full 80 minutes.

“We started well but then we started to muddle and there was some good pressure from Waiuku. We went to halftime only seven points up.

“We had to really knuckle down and there were quite a few things we weren’t happy with how we played.”

Despite their wins Marr feels the side is yet to really hit their straps.

“I think we are probably about five or six out of 10,” Marr said. “There is a lot of stuff we are doing really good but a few things we are really struggling with.”

Patumahoe Troydon Patumahoe Hotel made hard work of beating neighbours Karaka 38-34 in a fast-paced game of rugby that was entertaining but would have left both sets of coaching staff scratching their heads in disbelief.

Intercept tries, attacking kicks on their own line and phenomenal offloading saw 10 tries scored in the match.

Patumahoe managed to hold their nerve defending their own line in the final moments to ensure halfback Shea Furniss celebrated his 100th game for the club in style while powerful winger Kalim North earned his blazer.

“It was a crazy game,” Patumahoe coach Reon Graham said. “We started well and they kept fighting back and then we came back and got a good lead and then there were about four or five tries in about 10 minutes.

“Their effort and attitude at the end there was pretty pleasing.

“Kalim with his blazer and Shea with his 100th – it was nice to celebrate those milestones with a win. “They both ended up coming off injured so they left everything out there.”

Coach Jeremy Clark paid tribute to the quality of Onewhero, who remain winless but appear to be getting better and better each week.

“There were pros and cons to come out of it. It was a tough game and it really went the full 80 minutes. Onewhero really took it to us,” Clark said.

“I was quite happy with the boys to get over the line and get the points.

“There is a lot of quality out on the park with them and they really tested us. They have been a big improver and they are going to test a lot of sides moving forward.”

“We held the ball for long phases and we were able to do things. When we went over four or five phases we looked really good.”

Ardmore Marist and Drury collected wins in Sid Marshall Shield Premier 3 while Te Kauwhata got a default win over Puni.

Patumahoe secured an impressive win in Massey Cup Under 21 play on Fright night as they beat Pukekohe 33-15 under lights at Patumahoe Domain.  Manurewa Carter’s Tyre Service thrashed Waiuku 108-0 in the other fixture.

Karaka beat Beachlands Maraetai 40-22 in Under 85kg action. Onewhero, Waiuku and Papakura added wins in the grade as well.