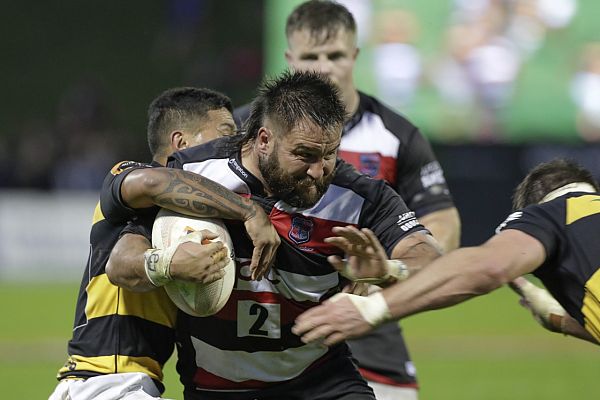 In a spirited and entertaining start to the 2019 Mitre 10 Cup Counties Manukau suffered a close loss to Taranaki.

Members of the Counties team that won the NPC in 1979 formed a guard of honour as the team's ran onto the park.

Then, after a moments silence to honour the passing of New Zealand Rugby great, Sir Brian Lochore, the game was underway.

The home side began well as the Steelers controlled possession and spread the ball to both sides of the park.

Sonny Bill Williams utilised his offloading skills to good effect as the Steelers gained valuable meters up the park before the ball was spread wide to Kirisi Kuridrani who strolled over for the opening try after three minutes.

Taranaki then hit back with a try to centre, Sean Wainui. The Taranaki pack was recycling ruck ball at speed and once near the line Wainui went looking for work close to the pack and was rewarded for his efforts.

The home side responded with their second try of the afternoon after the forwards got their driving game going. With the maul off a lineout going forward at pace halfback, Jonathan Taumateine ran blind before delivering a nice offload to Etene Nanai-Seturo who scored.

Taranaki then caught the home side napping at the restart and in double quick time the pace of Waisake Naholo saw the visitors over the line.

Taranaki were then awarded a penalty try after Steelers flanker, Samuel Slade, was adjudged by referee, Angus Mabey, to have collapsed a rolling maul near the tryline.

A penalty kick to Taranaki's Daniel Waite soon followed, before the home side exerted some pressure of their own.

At the restart Nanai-Seturo chased hard and was rewarded with a charge-down.

From the ensuing lineout Taranaki botched the throw-in and with the luck of the Irish on his side, Conan O'Donnell barged his way over to score.

Riley Hohepa converted and the Steelers were only down 22-19.

Unfortunately for the Steelers the visitors had the last say of the half when flanker, Lachlan Boshier scored with time all but up in the half. Waite converted and at halftime Taranaki were ahead 29-19.

The Steelers began the second stanza the better of both sides but despite several chances to score they just couldn't cross the line. A combination of staunch Taranaki defence and crucial passes not sticking both factors.

Taranaki slowly got into their work and with a 10-point buffer on the scoreboard were happily playing percentage rugby.

From a scrum on the Steelers 22, Daniel Waite went blind of a deft pass from Te Toiroa Tahuriorangi. Waite easily drew the defence and Jackson Ormond was in at the corner.

Five minutes later Hohepa kicked a penalty to close scores somewhat. Then the biggest cheer of the day for Dan Hyatt, who came off the bench to score after the Steelers both desperately and effectively spread the ball wide and were rewarded with a fine try.

Andrew Kellaway converted and despite a final search for the winning try Taranaki held on for the win.