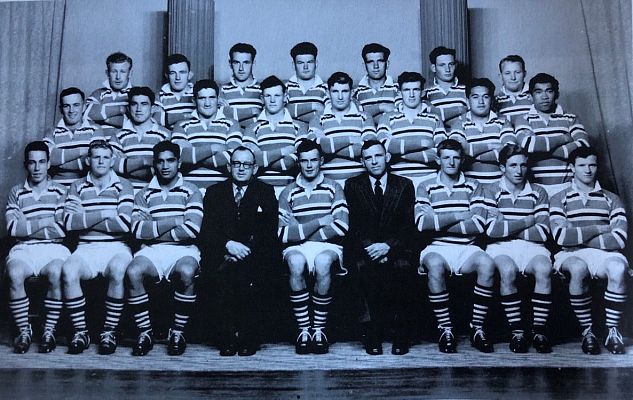 Counties Manukau Rugby Football Union are celebrating the 64th Anniversary of their first match as a union. The inaugural match against Thames Valley took place on a balmy Saturday in Waiuku, back when the new union was known as South Auckland Counties.

President Claude Downes had the honour of kicking the game off, and despite an 11-0 half time lead to Thames Valley, coach Wally Knight provided an impactful halftime team talk that allowed the side to transform.

In the second half the pack swung into attack, with Pat Walsh dotting down the first try near the posts. Lock Dick Honey added the extras. The second try, following a nice kick through from second five eighth Neil Watene was placed in the corner by winger Brian Wilson, trailed by a successful side-line conversion from Dick Honey.

Pat Walsh scored the final try, scoring out wide. You could have heard a pin drop as Dick Honey lined up his side-line conversion. As the ball sailed between the posts, the crowd erupted as the flags went up. The team went home with a score of 15 – 14, and there was much to celebrate at the local Kentish Hotel afterwards.

Rugby as a sport has provided our region with a sense of pride and we are so proud of the rich amount of history and experience that has come since that very first match. The game over the years has given countless individuals and organisations the enjoyment of being involved directly as players, coaches, administrators and sponsors, or just by being loyal fans – cheering on their team week after week.

The history of Counties has been very much about adventurous football, and over the years our teams and union have endeavoured to establish an identity. Our ‘sleeves rolled up and get into it’ mentality, driven by an endless band of willing volunteers has been the hallmark of Counties Manukau rugby.

Over time, our union has progressed and developed into what it is today. Our new focus comes to lay on an inclusive and modern theme – one that is characteristic of who we are, and who we strive to be: “WE ARE COUNTIES MANUKAU”.