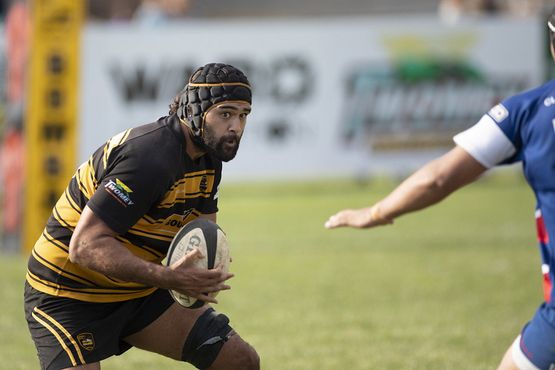 Manurewa Kidd Contracting produced arguably the performance of the season as they retained the Counties Power Cup in stylish fashion and beat Patumahoe Troydon Patumahoe Hotel 34-12 at Mountfort Park.

The two teams, who met in last season’s semifinals, went back and forth in a close first half although the home side always looked a little more dangerous.

As the game went on however the big Manurewa ball-runners began to make more in-roads while their defense blanked whatever Patumahoe could throw at them and they ran away with the match in the final quarter.

The thing with Patty is they don’t go away so at halftime we had to refocus and adjust a few areas and we did that and got the result.”

After dropping their first game of the season to Bombay, Manurewa has gone from strength to strength and now might be the form team of the competition.

“We always we want to get performances and there are always things you can improve on,” Clark added.

In a game befitting of a final, the last two McNamara Cup winners went hard at it in a quality game of football.

“We got off to a good start – I was really happy with the start compared to the last couple of weeks,” Bombay coach Jeff Marr said. “It was a back and forth game really – both teams had chances in the first half and it came down to who was more desperate in the end.

“I was really happy with our line out,” Marr added. “We were probably guilty of not finishing off a couple of opportunities as well. I don’t know if we were clearly better than them in lots of phases. Our set piece worked well and we put a lot of pressure on them at ruck time and that gave us opportunities to counter ruck and get turnovers.”

Pukekohe Mitre 10 Mega got back in the winner’s circle with a convincing 36-20 win over Onewhero Silver Fern Marquees at Onewhero Domain.

A week after falling to Manurewa and dropping their first game of the year, Pukekohe bounced back with a four-try bonus point win.

“It was a tough battle actually,” coach Sean Polwart said. “Onewhero took it to us and played a physical game and disrupted our ball quite well and made it a little bit of a dogfight.

“The score didn’t reflect the performance but glad to get back on the winning side of things.”

Polwart thinks the loss the week before might have actually had a positive impact on his team.

“You never want to lose – ideally you want to win all your games but that isn’t how things work so you take learnings from that.

“It was a good chance to have a look at our game and the boys understand what shifts we need to make to take our game to the next level.

“So I think it was a good thing for us.”

Karaka made it two wins on the bounce with a 49-30 win over Papakura Ray White at Massey Park.

The two sides could barely be separated in the first half but the experience and quality of Karaka shone through late as they sealed the game and a much-needed five competition points that gets them right back into contention.

Papakura, Patumahoe and Pukekohe all had wins in Under 85k action.