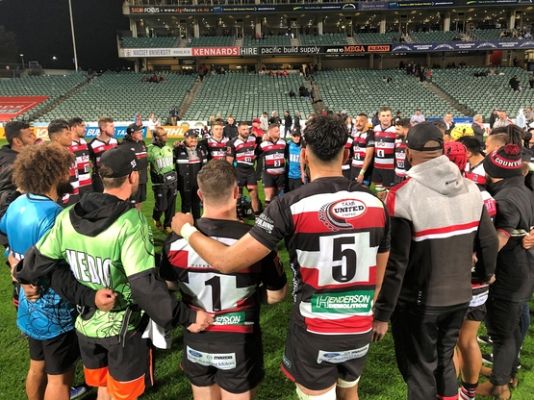 Move aside Arnold Schwarzenegger, Conan the Destroyer is alive and well playing for the Counties Manukau PIC Steelers.

Conan O’Donnell produced a destructive performance to lead the PIC Counties Manukau Steelers to a 39-25 victory over North Harbour in Albany.

The round two victory in the Mitre-10 Cup was the first by the Steelers over Harbour since 2013, with the five tries to four epic giving the visitors the bonus point five-pointer to get their campaign moving forward.

After a strong start, the Steelers pushed to a 22-7 advantage on the back of a powerful forward effort and tries to O’Donnell, Kalione Hala and Kirisi Kuridrani. The home side fought back into the game with a strong scrum led by All Black Karl Tu’inukuafe to trail the Steelers 22-15 at halftime.

Harbour made a fast start to the second half with a Matt Duffie try until Kuridrani bagged his second try out wide – ironically slipping at first but recovering to power over with a grand Riley Hohepa conversion from wide out in the wet conditions.

Harbour hit back with a try to close the gap to four points before a Hohepa penalty gave the Steelers the 7-point gap.

With Tu’inukuafe off with injury and O’Donnell switching to the other side of the scrum, the Steelers re-asserted their dominance upfront, including an outstanding lineout to secure their own ball and nab plenty off the opposition.

The dominance led to a penalty try from a dominant scrum five minutes from the finish as they played out time to secure an encouraging win.

While O’Donnell was impressive, so too was the front row; lock Damon Leasuasu was a key figure at lineout and captain Sam Henwood eye-catching along with fellow loosies Sam Slade and Malgene Ilaua.

Jonathan Taumateine was superb at halfback while Hohepa, in just his second game, played with maturity and his boot was a telling factor.

The outside backs made the most of their opportunities with three tries to the wingers Hala and Kuridrani while Australian fullback Andrew Kellaway continues to prove a key signing for the Steelers.

The Steelers now head home to host neighbours and rivals Waikato at Navigation Homes Stadium in Pukekohe next Saturday at 7.35pm, which ticket holders from the opener last week able to secure half-priced season tickets.