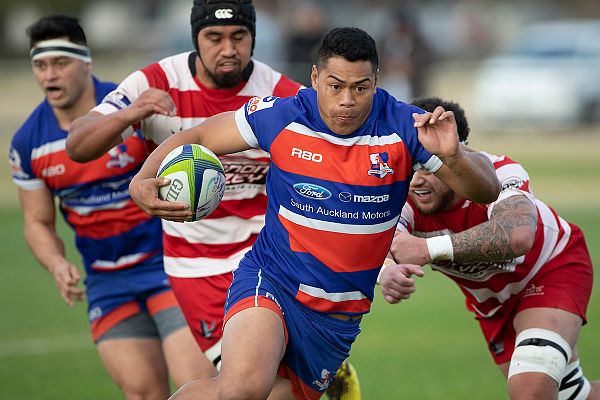 Ardmore Marist South Auckland Motors have one hand on the McNamara Cup after a dominant semifinal win over Karaka.

The top side during round robin play dispatched the in-form Karaka side 53-8 at Bruce Pulman Park to seal their place in the competition final at Navigation Homes Stadium in Pukekohe next weekend.

The Doug Sanft-coached side never looked troubled and raced out to a 22-3 lead at the break. By the time fulltime sounded they had run in eight tries to one – Latiume Fosita racking up a personal haul of 18 points.

It reversed the second round match where Karaka ended Ardmore Marist’s unbeaten streak a month ago.

“I think we turned up this week with a bit of momentum and I just think the boys were hungry,” Sanft said. “There was some motivation there because last time we played them at home they beat us.

“Our execution was on point.

“It was always going to come down to the breakdown. We executed our break down well. We got penalized a few times in the first few minutes but once we got that sorted I thought we were pretty good.

“It was a team effort but Fotu Lokotui was a big difference especially at the breakdown.”

Having dropped just two games all season Ardmore Marist are one win away from capping a remarkable year.

Patumahoe Troydon Patumahoe Hotel had to dig extremely deep to sneak past Manurewa Kidd Contracting 29-28 in the other semifinal at Patumahoe Domain.

Not for the first time this season the home side rallied late in the game and scored a game-deciding try in injury time to get the win.

With time up Patumahoe won a lineout on halfway and began a rolling maul that got them into the Manurewa 22. After a number of phases replacement forward Matthew Malins dived over in the corner from close quarters – the action happened on the far side of a ruck and referee Antony Petrie was blinded by players in the way. He referred with his assistant referee, taking advice before awarding the try.

The decision broke the hearts of the Manurewa side, which had led for the majority of the game and were up by 16 points at one stage while it sent Patumahoe to their first final since 2012.

“Rewa brought a hell of game and in a way I feel for them being unlucky there at the end,” Patumahoe coach Reon Graham said. “I just have to give credit to our boys – all week I asked for them for ticker and that is exactly what they gave.”

Patumahoe looked out of it when second five Riley Hohepa conceded a penalty try and was sent to the sin bin for a professional foul early in the second half. Manurewa scored from the re-start and shot out to a 16 point lead.

“I just knew it was going to be harder to get into them at that point,” Graham explained. “The message was to just stick to our systems and hold the ball and that is what we did. We managed to score a couple of tries and stay in the game.”

In a twist of fate Sanft won a title for Patumahoe as a player. This week he will coach the side standing in their way.

Pukekohe Franklin Long Roofing progressed to the Premier 2 final with a 20-8 win over Karaka at Colin Lawrie Fields. The leading side in round robin play saw off the challenge of Karaka to set up a clash with neighbours Patumahoe Dave Redshaw Electrical. The latter produced a superb performance to beat Manurewa Wise Property Management 50-32 at Mountfort Park and earn their first final appearance in the grade in over 10 years.

In Premier 3 action Weymouth booked a spot in their second consecutive final with a narrow 12-7 over a committed Maramarua side. Weymouth has dropped just one game this season having gone unbeaten in 2017. They will play Te Kauwhata, who saw off the challenge of Drury with a convincing 44-0 win at home.

Pukekohe and Karaka will square-off in the Massey Cup Under 21 final – backing up their status as the top two sides in pool play. Pukekohe enjoyed a comfortable 39-20 win over Ardmore Marist Ross Roof Group while Karaka came out the better of a seesawing clash with Patumahoe Albycon Ltd at Karaka Sports Complex. The visitors led with seven minutes remaining but Karaka held their nerve to take a 29-21 win.

Patumahoe Pak N Save will play for their fourth-straight Under 85kg title after dismantling Pukekohe 35-12 in their semifinal at Patumahoe. They will meet Karaka in the championship-decider – the only side to have beaten Brad Healy’s side this year. Karaka accounted for Papakura Ray White 17-13 in a tight semifinal.