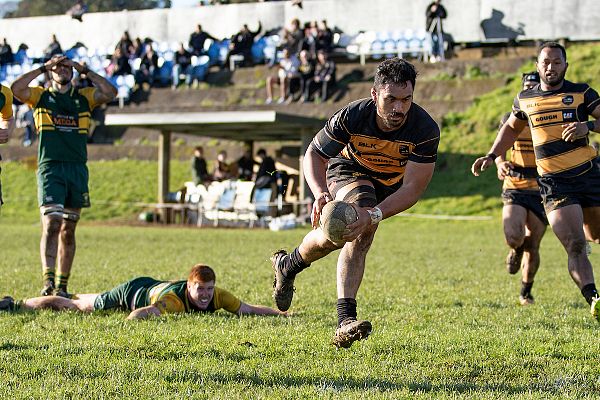 Karaka knocked over one of the leading sides for the second week running to keep alive their semifinal hopes and push four-time defending champions Bombay to the brink of elimination.

All eyes were on the Counties Power Game of the Week at Karaka Sports Complex as last year’s runners-up battled Manurewa Kidd Contracting to take a vital 42-33 win that had implications on most teams still in the playoff hunt.

Scott Penney’s side made a fast start and raced out to a 25-0 lead before Manurewa came storming back into the contest.

“It was just a really good day at the office for us,” Penney said. “We showed a lot of patience and stuck to our plans. The boys have realized when we do the basics well good things can happen for us.

“It is really exciting leading into the business end of the season.”

Karaka will qualify for the semifinals should they beat Papakura Ray White and secure a four-try bonus point next week. If they don’t do that, Bombay will make the playoffs.

The loss means Manurewa cannot get a home semifinal and need to secure at least a point in their final round robin match to ensure they continue their season.

Waiuku led for periods of the game and had a chance at stealing victory as they attacked Patumahoe’s line in the closing moments.

But the home side showed steely resolve to hold on and secure a home semifinal when the fulltime whistle sounded.

“We have a few injuries and had a real light week just to get through,” coach Reon Graham said.

“We knew it was going to be hard and it was. It is good we were really pushed until the end because I think those are the games we are going to get at the end.

“They are a big mobile pack and to come out on top is great for us.”

Patumahoe will take an unbeaten second round record into next week’s clash with top-of-the-table Ardmore Marist South Auckland Motors.

Defending premiers Bombay did their part to try and secure the fourth playoff spot by beating Pukekohe Mitre 10 Mega 24-14 in a ferocious contest up the hill.

While other results haven’t fallen their way over the past couple of weeks Jeff Marr’s side has taken maximum points outs of their final three games and will rely on getting the right results elsewhere next weekend if they are to keep alive their hopes of a fifth successive title.

Bombay raced out to an early lead, securing the crucial four-try bonus point in the first half.

But a fired up Pukekohe side and a trend of struggling to score second half points prevented Bombay from really hitting their straps in the second spell.

“All set to go in the second half and we decided to putter along on four cylinders rather than eight.”

Bombay will now have to sit and watch other teams decide their fate next weekend. They are tied on the table with Manurewa for third while Karaka are four points behind in fifth.

“It is out of our hands – we have done all we can. We knew after the Ardmore game we had to get maximum points from our last three games and we have done that so it is in the hands of the Gods now.”

After a surprising loss last week to Karaka the top side in the competition is seeking to finish the regular season strongly so they carry momentum into the playoffs.

“I think we turned up with the right attitude but I think Onewhero was a bit under-strength,” Ardmore Marist coach Doug Sanft said. “I spoke to their coach and they are struggling with numbers.

“It is all about momentum now – that is what we are trying to count on.

“Last week we played against a desperate Karaka team and we weren’t desperate enough because we already had that home semi.

“We didn’t have the right mindset so it is important we put in a good performance [this week against Patumahoe].”

Karaka completed a great day for the club by securing a crucial 50-17 win over Manurewa Wise Property Management to boost their semifinal chances in Premier 2 action.

Te Kauwhata scored the upset of the season in Premier 3 play as they beat Weymouth 36-26. It is Weymouth’s first loss since entering the grade at the beginning of last season. Other winners were Drury and Maramarua.

Ardmore Marist Ross Roof Group collected a 44-7 win over Papakura Ray White in Under 21 action. Karaka and Pukekohe also had key wins. Pukekohe, Karaka, Patumahoe and Ardmore Marist have all qualified for the semifinals in that order regardless of final round results.

Patumahoe Pak N Save thumped Pukekohe 50-5 in Under 85kg action to secure top spot heading into the semifinals. Karaka and Waiuku also picked up wins.