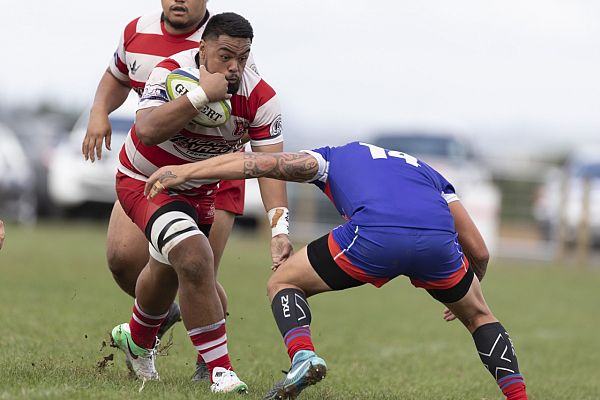 Ardmore Marist South Auckland Motors sit atop the McNamara Cup standings after a superb 29-7 win over Karaka to take the Counties Power Cup.

The four-try bonus point win lifts Doug Sanft’s side to a six win, one loss record.

With nothing in the contest in the first half it was the visitors that pulled away in the second spell with a dominant performance.

“We were better in the second half when we made some adjustments to what happened in the first half,” Sanft said.

“Credit to Karaka they put us under pressure in the first half and the first 20 minutes of the second.

“We started building some momentum and building some phases. We had been trying to force the pass and get on the edge too early – we didn’t earn the right to get there.

“Karaka put us under pressure and that is where the errors came.”

With the competition drawing to the end of the first round Sanft thinks it is the most even competition he has seen in recent memory.

“I feel every game is tight, which is good and good for the competition.”

Manurewa Kidd Contracting kept in touch with leaders Ardmore Marist thanks to a gutsy 17-14 win over Patumahoe Troydon Patumahoe Hotel.

The visitors had to do it the hard way, spending a large portion of the game with 14 men on the back of two yellow cards and a red. At one point they were down to 13 but never conceded a try while short-handed.

Patumahoe went close to stealing the game at the end but a crucial defensive play from Manurewa secured the result.

“To come here to Patty and get the victory is going to pay dividends for our season,” said coach Jeremy Clark. “We always knew it was going to be tough and it didn’t disappoint.

“We knew it was going to be wet so we had to change our game plan accordingly.

“Big ups to Patty – they gave it to us relentlessly for a long time. Just to hold on and make that last play in the corner is a big thing for the boys.”

Manurewa winger Willie Tuala dotted down yet again to remain at the top of the AS Wilcox leaderboard with nine tries on the season.

Four-time reigning champions Bombay picked up their second win on the bounce with a 28-19 win over Waiuku Brian James Contracting.

After a slow start by their standards Bombay appear to have turned the corner of late.

“We are starting to,” coach Jeff Marr said. “The first round is always about looking after your own shop really. I thought we stepped up a bit this week because Waiuku were pretty desperate to win and it is always a tough game out there too in those sort of conditions.

“The boys played with a lot of passion and were really keen to get a good result.

“It is a step in the right direction but it is just a step.”

Onewhero Silver Ferns Marquees got back into winning ways with a narrow 22-14 victory over Papakura.

Having dropped the previous three games it was important for Onewhero to keep in touch with the leaders and they didn’t disappoint. They grabbed an early 10-0 lead in the first half and hung on for a crucial four competition points.

Karaka’s Under 85kg team got revenge on last year’s champion Patumahoe Pak N Save outfit – winning 18-10 at Karaka Sports Complex in the Counties Power Game of the Week. Rhys Pratt was named AS Wilcox and Sons Player of the Day for his all-round play but especially for making some big tackles at key times. Pukekohe and Papakura also had wins.