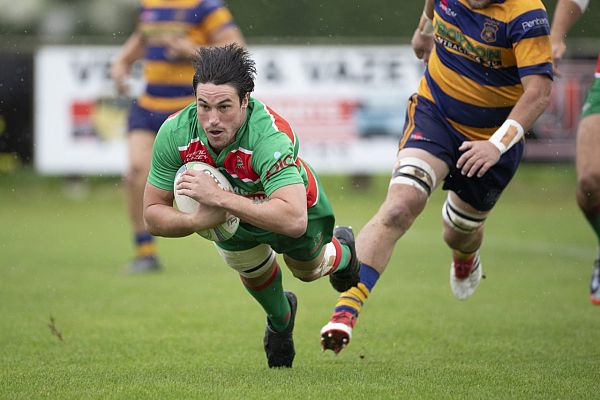 The home side came out of the sheds in top form, piling on two early tries and completely dominating the opening quarter of the game. They had control of the ruck, matched Patumahoe at set piece time and played a smart territorial game to control the majority of the first spell.

Patumahoe got themselves into the game late in the half through a try to veteran outside back Vern Comley while they went close to somehow taking a lead at the break only to blow a scoring opportunity.

The visitors improved as the game went on and got good impact off their bench. Second five Riley Hohepa hit a penalty with 10 minutes to go to put his side in front for the first time.

Waiuku had two opportunities to go back in front from handy range but they sailed wide and Hohepa sealed the win with a try on fulltime on the back of a great run from Kalim North.

“Really happy we got up for starters,” a relieved Patumahoe coach Reon Graham said. “All week we said how tough it was going to be regardless of the conditions. The wind came in and added to that, which we knew it would. Waiuku are a good side – they came out firing and we managed to weather it and sneak it at the end.”

After letting in a couple of soft tries in the opening minutes, Patumahoe’s defense looked solid throughout the match and Graham was pleased with that aspect of his team’s side.
“We were just a bit too keen and we left some holes around the rucks early but once we sorted that out the defense was good with good line speed.”

Waiuku took a bonus point out of the game but will be ruing not getting more for their efforts considering they dominated the majority of the game.

Manurewa Kidd Contracting sent yet another warning to the rest of the competition as they thrashed Karaka 53-23 in a dominant performance at Mountfort Park.

On the back of a dour, hard-fought win last week, Jeremy Clark’s side showed their attacking prowess in piling on eight tries against one of the better sides in the competition.

“It was a good game from our boys,” Clark said. “We had a good first half – 29-6 at halftime and pretty much everything we worked on during the week came to fruition. It was a good 40 minutes of footy. Tough, physical and we scored some tries going into the wind.

On paper it appears to be the best performance of the season and Clark admits it was right up there.

“I think it was one of our better ones. I think last week against Patty was a tough game and I thought we defended well there but this week scored plenty of points.”

Joshua Tafili joined teammate Willie Tuala atop the AS Wilcox leaderboard with 10 tries on the season.

The game was close at halftime with the home side holding a two point advantage before they managed to seal the result in the second 40 minutes.

“We weren’t switched on and they turned up to play,” coach Doug Sanft said. “They adapted to conditions while we still tried to play even though the weather wasn’t good for that.

“I would much prefer to have an ugly win than having a great performance and losing.”

Ardmore Marist has now won six straight games and a win over Patumahoe next weekend would ensure they finish top in the first round.

That would be a big boost for the club according to Sanft.

“To me it would be an achievement because this is my first season coaching in Counties. Every win is big for me.”

Bombay continued their resurgence with a 21-11 win over Pukekohe Mitre 10 Mega at Colin Lawrie Fields.

It is the third win on the bounce for the four-time reigning premiers, who have climbed up to sixth on the ladder but now lie within striking distance of the top four.

In Premier 2 action Karaka reversed the result of their premiers with a 25-17 win over Manurewa Wise Property Management. Leeroye Utai was named AS Wilcox Player of the Day. Pukekohe too managed to get bragging rights in Premier 2 with a victory over Bombay. Patumahoe Dave Redshaw Electrical and Ardmore Marist Ross Roof Group also collected wins.

Weymouth, Maramarua and Drury picked up wins in Premier 3 action – Weymouth remains unbeaten at the top of the standings.

Pukekohe enjoyed an impressive 28-17 win over Karaka in Massey Cup Under 21 play. Other winners in the grade were Patumahoe Albycon Ltd and Ardmore Marist Ross Roof Group.

In Under 85kg action Karaka beat Pukekohe 21-15 while Patumahoe Pak N Save got back to winning ways with a convincing win over Papakura Ray White. Bombay Lincoln Farms proved too good for Waiuku.

It was a mixed day for Counties Manukau women’s teams with Manurewa and Ardmore Marist picking up wins while Pakakura and Waiuku suffered losses.