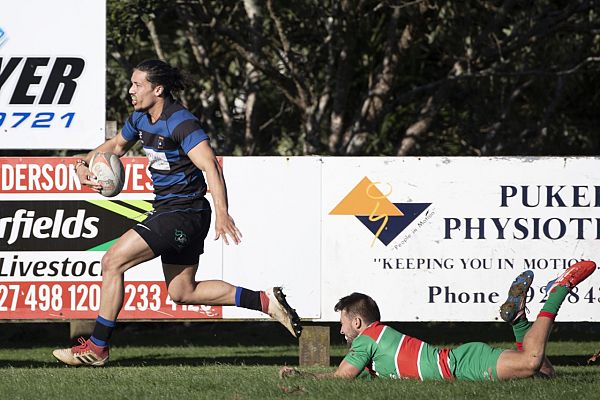 Onewhero Silver Fern Marquees kept alive their semifinal hopes with a hard-fought 24-20 win over Waiuku up the hill on Saturday.

Both teams scored three tries in the match but the goal-kicking of Rhain Strang proved the difference on the scoreboard.

It was a back and forth game with a number of lead changes.

“It was a good win for us,” coach Lesley Vainikolo said.

“The boys showed lots of character and patience to come back from behind to win.

“We still have our eyes on that top four.”

Ardmore Marist South Auckland Motors retained their position at the top of the standings while also successfully defending the Counties Power Cup as they smashed Papakura Ray White 77-19 in a result that sends an ominous warning to the rest of the competition.

Doug Sanft’s side racked up a total of 13 tries in the massacre and had 46 points in the first half alone but he was far from happy with the performance.

“I am quite critical of what we do. I think they were missing some players to be honest,” Sanft said.

“We were quite clinical in the first half but we got sloppy in the second and credit to Papakura – they just never stopped fighting and they scored three tries – to in the second half.”

Ardmore Marist is in great position – well clear of the chasing pack but it wasn’t all rosy picking up an injury concern.

“We lost one of our props with ankle ligament damage so he will miss a few weeks.”

“It was probably one of our best performances of the season so far,” coach Jeremy Clark said. “We were very happy with the result – it was an 80 minute performance.

“It was just one of those things where everything gelled and worked well. The platform was set up front – the forwards dominated up front. We were defensively sound and 21-0 at halftime we thought we had done well but it was quite a strong wind so we knew we had to hold the ball, no kicking, and every time we went over five or six phases we scored points.”

Bombay scored first and had the early running but the visitors warmed to the task and grew more confident as the match went on.

Counties Manukau and Blues representative Joe Royal was instrumental in the side’s win as they consolidated third place on the ladder.

“To win up here in the second round is always hard because the field gets a bit boggier and it is always hard coming here against a well-drilled side that are four-time champions as we know so that is a big step forward,” coach Reon Graham said.

“We just started putting our attack together a bit better and our defense took another step forward from last week.”

The Patumahoe back line looked threatening with some front foot ball. Brock Hooper, Riley Hohepa and Sam Furniss looked particularly damaging at first five and in the midfield.

“Riley did well – he has been out a couple of weeks with crook ribs so it was good to see him come through the game well with a good game on defense and attack,” Graham added.

Ki Anufe scored 12 points to top the AS Wilcox Leaderboard but his 10 minute spell on the sidelines with a yellow card hurt the home side.

It was a top day for the visitors as Patumahoe Dave Redshaw Electrical kept their winning run going with an impressive 19-12 win over Bombay in Premier 2 play. Pukekohe Franklin Long Roofing enjoyed a 35-25 win over Manurewa Wise Property while Waiuku thrashed Onewhero Hinemoa Produce 80-10. Ardmore Marist Ross Roof Group completed a superb day for the club as they hammered Papakura Ray White 79-12.

Te Kautwhata, Karaka and Weymouth picked up wins in Premier 3 action. Weymouth and Te Kauwhata remain at the top of the standings with those victories while Karaka’s success was their first this season.

Papakura Ray White, Karaka and Patumahoe Pak N Save picked up wins in Under 85kg games while it wasn’t a great day for local clubs in women’s action with both Manurewa and Ardmore Marist losing to Auckland opponents.