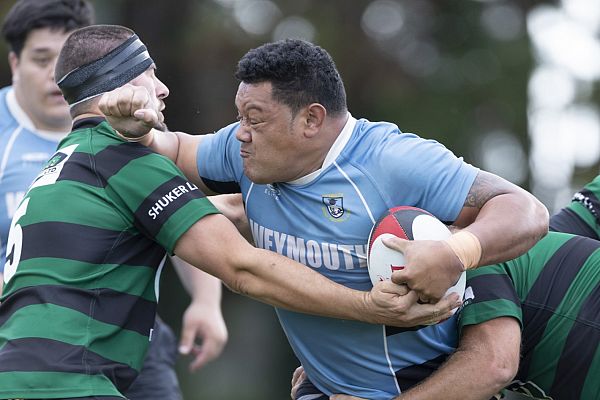 Pukekohe Mitre 10 Mega needed a late try to take victory over an unlucky Papakura in McNamara Cup action on Saturday.

For the second time this season Papakura appeared to be set for a break-through win against one of the competition’s leading sides only for a heart-breaking last gasp touchdown to deny them.

Pukekohe coach Mark Price admitted his side was fortunate to get away with the win. A charged down kick that bounced Pukekohe’s way was the difference between victory and defeat.

“We had to work extremely hard to get it,” Price said. “Papakura put us under a lot of pressure and it took more than the 80 minutes to get the job done.

“To be perfectly honest I feel the difference was luck. We had a bit of ball at the end there and we actually turned it over and we were lucky to get a charge down and the ball bounced our way.”

Price is convinced that a win for Papakura against a top side will happen at any time. The former Steelers rep was impressed with his opposition.

“I think we were below our best but we were forced into it,” added. “The way Papakura forced us into doing things we don’t normally do so a lot of credit needs to go to Papakura.”

Karaka took a convincing 47-10 win over Waiuku Brian James Contracting at Rugby Park to keep pace with the leading sides. They trail the competition leaders by just three points.

Scott Penney’s side racked up seven tries to continue their impressive run – they’ve now won four games on the bounce after a first round loss to start the season.

“It is good for us to keep rolling on,” Penney said. “It wasn’t as convincing as the score line suggests. Waiuku played some really good rugby – that is the first time I have been out there and seen them put a bit of width on their attacking form so Jeremy [Wara] is definitely doing some good things out there.

Both teams really struggled to adapt to the referee so that changed the game a little bit.

“The boys stuck to their game plan. We are getting into some structure. Our scrum went really well after being tested by a big Onewhero side the week before.”

Patumahoe Troydon Patumahoe Hotel remain the only unbeaten side in the competition while retaining the Counties Power Cup as they edged Onewhero 27-20 at Patumahoe Domain.

It was the fifth successive win for the home side and the four-try bonus point win ensures they remain at the top of the standings for another week.

“It was good,” coach Reon Graham said. “I am happy with the performance because Onewhero are always a tough side. They kept coming at us.

“There were patches of defense that we were really happy with and that was the focus of the week because they have some big, strong running backs and a couple in their forward pack and we held them out for the most part.”

Graham singled out a few individuals for strong performances.

“Tamati Fromm got our player of the day. He led the way in our tackles and go forward. Palu, our number eight had another strong game. Craig Jones in his blazer game made a lot of tackles and then Troy Michie at halfback and then fullback played really well and had a good running game.”

Patumahoe faces second-placed Karaka next week in a top of the table clash.

Bombay, who have won four straight McNamara Cups picked up their fourth loss in five matches to languish in eighth place on the championship ladder. They have been in every game however and have endured an extremely tough schedule to open the season.

The 12-tries to one win sees them remain in fourth place on the table while impressive winger Willie Tuala’s hat-trick has propelled him to the top of the AS Wilcox and Sons leaderboard with six tries on the season.

“I was happy with the performance,” coach Jeremy Clark said. “It was always going to be tough not knowing what to expect from TK. We just know they give a tough 80 minutes and it was no different yesterday.”

Manurewa appears to be the big improvers this season and already look capable of challenging for the title for the first time in a number of seasons.

“We have had goals from the start,” Clark said. “It is only early days and there is still a lot of improvement to be done. We wanted as many points as we can in the first round and we seem to be ticking a lot of boxes.”

In Premier 2 action Pukekohe Franklin Long Roofing, Ardmore Marist Ross Roof Group and Karaka backed up the performances of their top sides by recording victories while Onewhero reversed their premier’s result in beating Patumahoe Dave Redshaw Electrical 28-29. Manurewa Wise Property got a walk over win against Te Kauwhata. It means Pukekohe, Karaka and Manurewa hold the top three spots while Waiuku and Patumahoe are tied for fourth.

Premier 3 Sid Marshall Shield got underway this week with defending champions Weymouth starting off in perfect fashion – beating Maramarua 43-17 while Drury opened their campaign with an close 22-19 win over Puni.