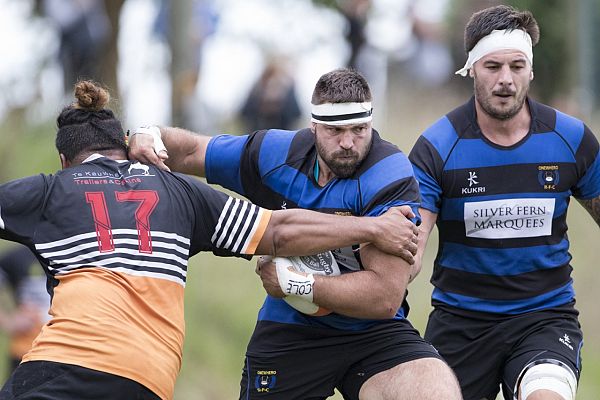 Veteran Steelers prop Sean Bagshaw will play his 100th game for Onewhero this week in the Counties Power Game of the Week.

The 31-year-old has been a loyal servant to the blue and blacks and brought up 50 caps for Counties Manukau during last season’s Mitre 10 Cup.

The two teams are at opposite ends of the McNamara Cup standings as they go head-to-head this weekend.

Bombay have shot out of the blocks quickly dismantling Manurewa and Papakura and will look to make it three wins on the bounce as they face Onewhero Silver Fern Marquees at Onewhero Domain on Saturday.

The McNamara Cup champions from 2015-2018 made a slow start 12 months ago and couldn’t catch up in the final rounds despite hitting top form.

Coach Jeff Marr is happy with how his side has performed through the opening fortnight but knows they will be in for a tough challenge up front against a team that will ask questions at set piece time.

“We always expect them to be a pretty hard-nosed forward pack and they get into it and play a game that is always a bit confrontational,” Marr said. “That is what we are preparing for.

“That is what we want to test with ourselves – how we go at scrum time and at set piece. Just getting the accuracy and detail around that so we can use it as a launch pad. I think all the other teams are probably in the same boat.

“We keep doing that for pretty much the whole first round.

“When we play these games at the beginning of the season we tend to focus more on what we have to try and get into place and we still have a bit of work to do there yet.”

Traditional rivals Pukekohe Mitre 10 Mega and Patumahoe Troydon Patumahoe Hotel will do battle at Colin Lawrie Fields in a contest between two unbeaten sides. The home side recorded a big win over Karaka in their first match of the season last week while last year’s runners-up Patumahoe have run out convincing winners over Onewhero and Waiuku in their two matches so far.

Defending champions Ardmore Marist South Auckland Motors will take their two-game unbeaten start to the season to Rugby Park where they run into Waiuku Brian James Contracting. The home side secured an upset win over Karaka first up but went down to Patumahoe last week.

Papakura Ray White will host Manurewa Kidd Contracting at Massey Park in Papakura with both sides looking to secure their first win of the campaign.

Karaka has the bye.