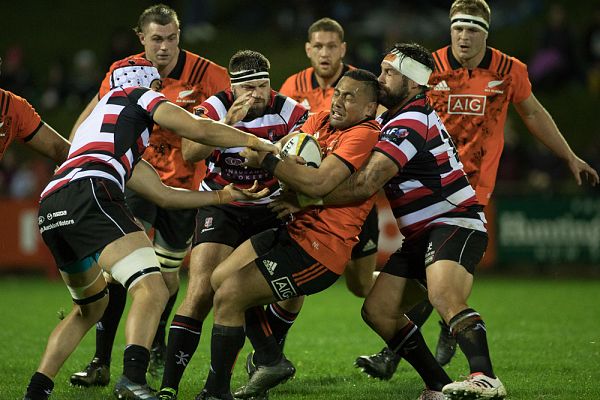 It was a great occasion in Pukekohe when the Counties Manukau PIC Steelers hosted the All Blacks and Taranaki. Prior to kick-off Steelers and All Blacks Kieran Read, Sonny Bill along with Cody Taylor entertained the sponsors in the lounge with SBW inviting the locals to the Counties Manukau B’s match at Bombay the following day that he is playing in.

With the action on the field starting, in front of an enthusiastic crowd of 12,000 the Steelers opened the match threatening on the wing, when Tevita Nabura attacked the corner, but it was Taranaki who were rewarded the first points with a penalty try.

The Steelers replied with Nabura again this time taking off from a Baden Kerr break to cross the chalk.  Kerr finished what he started, slotting the conversion to even up the scoreboard but from then on it was the Steelers who kept the points ticking over.

Halfback Augustine Pulu dove over from close range shortly after which again was converted by Kerr.  With five minutes left in the first third, centre Sam Furniss picked up a loose ball and ran 40 meters to just make the line with momentum caring him over, with Kerr adding the extras.

On full time of the Steelers v Taranaki stanza, loose forward Ronald Raaymakers dived over from a pick and go in the right corner with the conversion by Kerr leaving the Counties Manukau PIC Steelers with a lead of 28-7 on the score board.

Ahead of the All Blacks v Taranaki third, the crowd were entertained by Drury School Kapa Haka before the All Blacks ran out in bright orange strip.  The national side claim the first points when lock Brodie Retallick scored from a rolling maul.  Lima Sopoaga took the roll of kicking duties to give the them a 7 point lead.

The All Blacks added to the board when they scored a long range try.  It went through a number of hands with Dane Coles and Brodie Retallick involved in the lead up in the move finished by Ofa Tu’ungafasi.

The men in orange capitalized from a Taranaki spilt ball with Rieko Ioane cleaning it up, dashing to the line and dotting down in the left hand corner.

Taranaki scored an impressive try when former Wesley College student Sione Lea reached out in the right corner in a forward tussle from a rolling maul to score with Marty McKenzie converting.

The All Blacks halfback Aaron Smith scored on the back of a Ben Smith break with Sopoaga converting. The All Blacks showed some outstanding speed when Ngani Laumape took off and offloaded to Anton Lienert-Brown who turned on the gas and crossed in the left corner.  Sopoaga converts to give the All Blacks a 31-7 lead.  He added another five pointer when he crossed the line right in front and converted his own try. The try-fest continued when Waisake Naholo received a pass from Dane Coles and fell over the line with the conversion successful.

The All Blacks scored an end-to-end try lead by Laumape and Coles with the hooker getting the rewards and cracking the half century with a 52-7 lead.  Ben Smith followed with a try which finished the 2nd third of the match with the All Blacks ahead 57-7.

The final third between the PIC Steelers and the All Blacks, the visitors score 9 minutes in with Sam Cane crossing in the left corner and Sopoaga converting.  In an almost identical replay Cane crossed the line again which was converted.   They scored their third try with Ofa Tu’ungafasi diving over in the corner followed by a successful conversion.  Busy in the action Sopoanga scored to the right of the posts scrambled across the line with Damian McKenzie successfully taking over the kicking duties.

Much to the crowds delight the referee caught the ball off a Counties player.  In the closing minutes departing halfback Tawera Kerr-Barlow scored which was converted by McKenzie with the last try of the night going to Reiko Ioane on full time with McKenzie converting to finish the match 49-0.

Next week the Counties Manukau PIC Steelers Mitre 10 Cup starts on Saturday night when the host Auckland at ECOLight Stadium at 7.35pm.