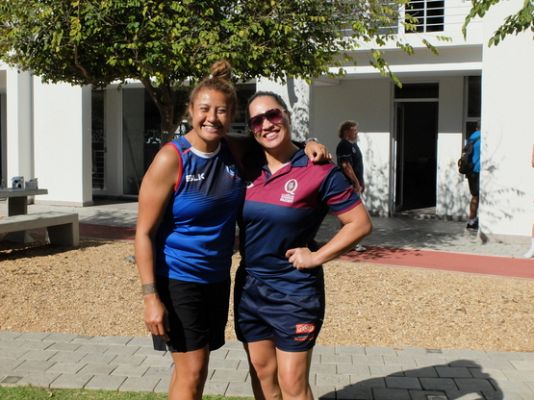 Cynthia Ta'ala from CMRFU joined 43 delegates from 16 unions over a week-long programme that forms a key element of World Rugby's strategic plan to accelerate the global development of women in rugby and drive inspirational leadership on and off the field of play.

World Rugby have broken new ground with the development of the women’s game with the first women’s High Performance Academy that has taken place at the Stellenbosch Academy of Sport in South Africa.

The Academy aims to accelerate the global development of women in rugby and drive inspirational leadership on and off the field of play, one of these delegates our very own Cynthia Ta'ala representing Samoa.

The High Performance Academy is aimed at building capacity within targeted unions by providing identified individuals with a bespoke learning opportunity in a high performance environment.

The participants are drawn from various strands of the high performance network, including coaches, match officials, strength and conditioning experts and high performance programme managers.

In 2018, the total registered female players figure saw the biggest increase at 28 per cent which equates to 581,000 players when compared with 2017.

Off the field of play, 2017 witnessed an historic and unprecedented decision as World Rugby increased the number of people who may sit on Council – its highest decision-making body – from 32 to 49, with the 17 newly-created positions to be held by women.

World Rugby Chairman Sir Bill Beaumont welcomed the initiative: “The development of women in rugby is the single greatest opportunity for our sport to grow in the next decade. The women’s High Performance Academy in Stellenbosch represents another important element of our organisation wide focus on elevating the women’s game and ensuring we create the opportunities for the development of women in rugby, both on and off the field of play.”

World Rugby High Performance General Manager Peter Horne said: “The Academy is designed to encourage interaction between the different strands of high performance individuals, including coaches, match officials and strength and conditioning experts. Importantly, to ensure the Academy acts as a catalyst for long term growth, participants will be supported by their strand leaders to develop an Individual Performance Plan specific to their development needs.”

World Rugby General Manager of Women’s Rugby Katie Sadleir added: “As an inclusive sport, World Rugby is committed to gender balance and the women’s High Performance Academy is another important step on the journey for women in rugby.”

The High Performance Academy is a programme that has been run by World Rugby in Stellenbosch since 2008. This year is the first year that focuses on female delegates only with a view to have a mixed gender programme in the following years.

The unions represented in the programme were: