Heated top of the table clash set for Saturday. 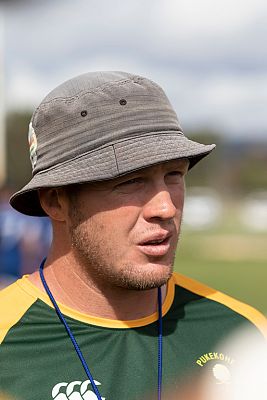 The battle between two unbeaten sides with a rivalry that has a recent history of spilling over features as the Counties Power Game of the Week.

Pukekohe Mitre 10 Mega and Bombay have a long and storied rivalry but it came to a head late last year in a brutal game that saw multiple cards handed out. You can bet both sides will have their eyes on getting a crucial McNamara Cup win at Colin Lawrie Fields this week.

“We know it is a great rivalry and it is going to be a hell of a challenge,” new Pukekohe coach Sean Polwart said.

“It is a home game for us so we really want to look after our home ground. That is the biggest thing in front of our friends and family at home.

“Bombay have been going well so we will have to have a look at them.”

Polwart has enjoyed a dream run to his debut season at the helm of Pukekohe. His side has won three straight games after an opening round bye. Those wins were all against semi-final teams from last year and they made the biggest statement of the season last weekend when they beat defending champions Ardmore Marist South Auckland Motors at Bruce Pulman Park.

“It is a great way for us to start with all of these hard games to give us a real test to see where we are at and this week will be another test for sure,” Polwart said.

Bombay comes into the game atop the standings having won four from four to start their campaign but they also know the challenge from a suddenly in-form Pukekohe will be the biggest they’ve faced so far.

“I have only watched a little bit of it but I think they have had a great transformation under Sean,” Bombay coach Jeff Marr said. “They are going really well – they have had a pretty tough draw to start with and they have come away with the points in every game.

“It is a big challenge for us. They seem to be a pretty well-balanced side with a few new faces amongst guys that have been there a few years.

“We still need to be focused on what we are doing and keep working hard on what we need to achieve.

“We are getting a pass mark but not really getting the marks we want out of our performances the last few weeks.”

Onewhero Silver Fern Marquees are yet to register a win but appear to be improving each week and they run into another winless side in Papakura Ray White at Onewhero Domain. The visitors were tipped to be big improvers in 2019 but have struggled through the opening weeks and will be desperate to get the points on Saturday.

Ardmore Marist will look to bounce back with a win over Karaka, who came up just short of their first win of the year last week.

Manurewa Kidd Contracting travels to Rugby Park to meet Waiuku Brian James Contracting in a game both sides will want to win to stay in touch with the leading sides.