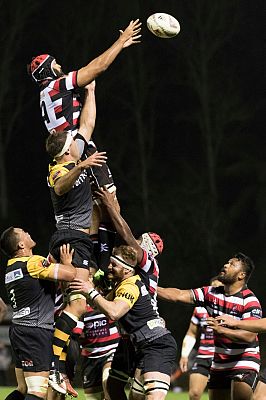 Fiji Sevens player Tevita Nabura, on the back of a strong running performance last week, will get his first start for the PIC Counties Manukau Steelers against Taranaki in New Plymouth on Saturday.

The big winger, who was in outstanding club form for Waiuku this season, will start on the left flank, in one of two changes to the PIC Steelers backline.

Twenty-year-old Karaka player Orbyn Leger, a member of this year’s winning New Zealand Under 20s World Cup side, gains his third cap in the Steelers’ midfield, after coming off the bench against Auckland and Waikato.

They have big boots to fill, coming in for star veterans Tim Nanai-Williams and Stephen Donald, who are both likely to make appearances off the bench.

“These guys have impressed this season both at game-time and on the training field with their skills and attitude and deserve their chance,” said PIC Steelers Head Coach Darryl Suasua. “Both Tim and Stephen picked up niggles and while they could start, we have a tough schedule and need to be sensible about their load.”

Co-captain Jimmy Tupou, who impressed in his return last week, moves to No 8 with Sam Henwood moving to his regular role at No 7 in place of an injured Fotu Lokotui. The middle row is completed with Viliame Rarasea returning after missing the Waikato game with injury to partner with the imposing Matiaha Martin.

Coach Suasua said the team need to make a better start and show more discipline than in their loss to neighbours Waikato.

“The penalty count was 9-0 in the first half against us with a yellow card, and we turned over ball with a lot of mistakes. We can’t afford to give teams such a head start like we did against Waikato. We must show better discipline and learn quickly to adapt to the referees.”

Last year Taranaki snuck home 30-29 in a thriller at ECOLight Stadium in Pukekohe with the last win by the Steelers back in 2013 which was a Ranfurly Shield defence, with a whopping 44-7 victory, the biggest differential between the two sides.

The teams played each other in the recent Game of Three Halves.

The game starts at 7.35pm on Saturday at Yarrows Stadium in New Plymouth.

Kids 13 and under will be FREE on the South Auckland Motors embankment thanks to Pak n Save Pukekohe. Match day Grandstand tickets are $20 for adult Grandstand, $15 for Students with ID and $10 for kids. South Auckland Motors embankment tickets are $10 for adult and $7 for students with ID. Individual tickets to the match are available from CMRFU office, the gate on game day or www.iticket.co.nz.

Corporate hospitality is available for all home fixtures. Season Memberships are on sale from only $50 for a South Auckland Motors Embankment membership or $100 for a Grandstand Membership for an adult and $50 for a child. Memberships are available from CMRFU office and www.steelers.co.nz or www.iticket.co.nz. For any enquiries phone 09 2370033.