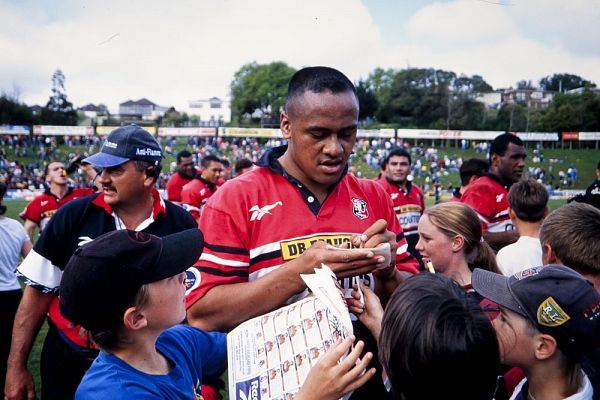 The Counties Manukau PIC Steelers will honour the legendary Jonah Lomu when they host Wellington in the Mitre-10 Cup clash in Pukekohe this Saturday afternoon.

The Jonah Lomu Memorial Game at Navigation Homes Stadium will not only pay tribute to Jonah, who played 29 times for Counties Manukau and won 21 caps for Wellington, but also raise funds for a worthy charity.

Coming up on three years since the passing of Jonah, who made the No 11 jersey (and No. 11 eyebrow) internationally famous, all tickets to the game will be $11 with $1 from each ticket going to the Franklin Hospice. Children 13 years old and under receive free entry to the embankment.

Local schools in the region have been invited to submit a project on the great man, with the winning class to be hosted at the game complete with snack packs, flags, posters and a signed Steelers jersey.

The PIC Steelers will play in special commemorative jerseys reminiscent of the jersey worn by Jonah in the 90s, and these jerseys will also be auctioned post-game with proceeds to go to the Franklin Hospice.

Counties Manukau Rugby Football Union have also announced a major fund-raising project to build a home in the new Jonah Lomu Drive subdivision at Paerata Rise, on land previously used by Jonah’s old school, Wesley College. The profits from the sale of the house will be split equally between the Franklin Hospice and Counties Manukau junior rugby.

Dhyreille and Brayley Lomu will be on hand to deliver the match ball at the start of the game.

“It is always a big occasion for Counties Manukau Rugby to play Wellington and it now has added significance because it commemorates one of the legends of our game and the man who put rugby on the international sporting map with a blockbusting performance at the 1995 World Cup – no man has dominated a Rugby World Cup like Jonah did that year,” said Counties Manukau Rugby Football Union CEO, Barton Hoggard.

“We also want to take this opportunity to support a charity that plays such an important role in our community. Jonah’s Counties coach in the 1990s, Mac McCallion, was cared for by Hospice at the beginning of this year before he passed away and Hospice New Zealand provide an incredible service that assists a huge number of families in extremely difficult times. We are hoping to raise a significant amount of money for Franklin Hospice whilst at the same time acknowledging two of the greatest names in Counties Manukau Rugby, Jonah Lomu and Mac McCallion.

“On the rugby field, this game is pivotal for the PIC Steelers’ season. The Steelers sit fifth on the table and a positive result against Wellington will go a long way to making the premiership playoffs.

“We hope the families of our region will join us at to Navigation Homes Stadium in Pukekohe to give their support to the Steelers. The Steelers have scored some spectacular tries this season and are playing with great determination and passion so we’d encourage our community to get to the stadium to enjoy some fantastic Saturday afternoon rugby.

“In addition, there is a Hot Springs spa pool (courtesy of YardArt) to be won as well as a trip for two to Queenstown (courtesy of Don Ha Projects) and Lone Star meal vouchers. The first 250 children on the embankment will receive a free Krispy Kreme donut and, if the kids don’t want to get involved in the mud slide, there will be a bouncy castle to keep them entertained. It’s going to be a great family day out.”