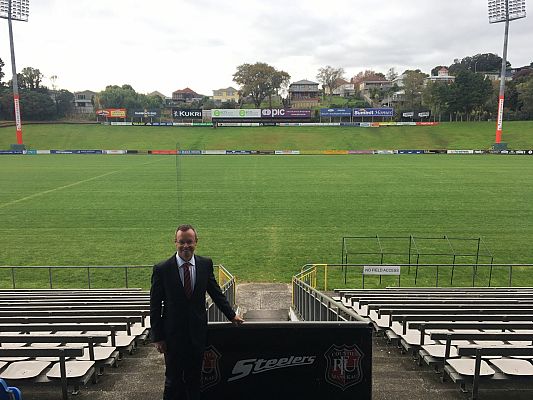 Hoggard joins Counties Manukau directly from the United Arab Emirates where he was a partner at Clyde & Co, the largest international law firm in Dubai.

The 44-year-old has practised corporate and commercial law in New Zealand, London and Dubai.  Whilst in Dubai over the last ten years, he has specialised in international cross border mergers and acquisitions and has worked on a number of significant transactions in the Middle East and Europe, in particular in the healthcare sector as well as in the oil and gas industry.

The father of four is no stranger to rugby.  The former first five-eighth played for Auckland Marist in two Gallaher Shield winning teams and was an Auckland age group and Auckland B representative.  He had a taste of European rugby having played for L’Aquila in the Italian first division and Bracknell in England’s National Division Two.

Hoggard said “I am extremely excited about joining Counties Manukau.  Not only does Counties have a storied history involving some of the most iconic players in the game but, off the field, it also has a board, management team, coaching staff and sponsors that are incredibly passionate and loyal.  They are all determined to ensure that Counties continues to be successful.  I look forward to assisting the union in the implementation of its strategies and the achievement of its objectives which includes growing player participation in our community in a safe and healthy environment and in a manner that allows each individual to develop into the best version of himself or herself as a rugby player and as a person”.

“Bart shares the Union’s vision and we believe that he will do a super job leading us in the next stage of Counties’ development.  He is supported by an excellent and passionate management team who all bleed red, black and white.”

Counties Manukau, who will proudly wear PIC Insurance Brokers on their playing strip, have an exciting season ahead.  The Steelers’ first Mitre 10 Cup home game is a local derby fixture against Auckland on 19 August, which sets up a cracking start to the season.   Current Farah Palmer Cup Champions, the Counties Manukau Heat are looking forward to defending their title in 2017 with the draw to be announced in the near future.

Tickets are available from www.steelers.co.nz or the union office.