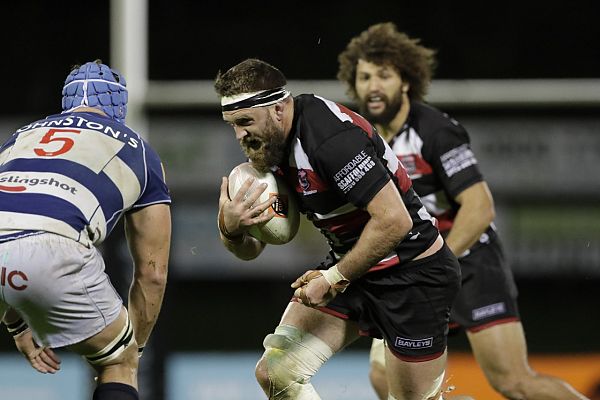 It took a late surge to seal the deal but Auckland had just enough in the tank to beat the Steelers 28-13 at Navigation Homes Stadium.

With the Dan Bryant Memorial Trophy up for grabs the home team began well and in the 7th minute opened the scoring with a Orbyn Leger penalty.

The Steelers kept up the pressure and the Auckland pack was clearly getting frustrated.

In the 12th minute Auckland's Jarred Adams missed Daymon Leasuasu with a swinging arm. From the ensuing penalty the Steelers drove close to the Auckland line and after several infringements from the visitors, Akira Ioane, was sin-binned for repeat offending.

The Steelers again got their driving maul going but the Auckland defence, despite being a man down, held out.

By the time Ioane returned to the fold the scoreboard had not been troubled.

In fact the next genuine scoring opportunity for either side was not until the 33rd minute when the Auckland pack drove over the locals line after a coordinated lineout drive.

Openiside, Blake Gibson with the try and Harry Plummer adding the extras to give Auckland a 7-3 lead.

A lead they would take into the sheds at the break.

The Steelers would have felt somewhat ripped off to be down at the break and their frustration was compounded when in the 44th minute Caleb Clarke cut through the Steelers line to score under the posts.

Plummer added the easy conversion and Auckland were ahead 14-3.

The Steelers fortunes improved when Auckland again found themselves a man down when centre Tumua Manu was given a yellow card after a dangerous tackle on Steelers wing, Kirisi Kuridrani.

The one-man advantage eventually paying dividends in the 56th minute when after a lineout drive the Steelers crosse the Auckland line. Hooker, Joseph Royal at the bottom of the maul came up with the ball and saluted the applauding crowd.

Another sin bin to Auckland, this time to substitute, Jonathan Ruru, once again gave the Steelers numerical superiority.

It took some time but eventually the Steelers made the numbers work and after a solid build up and several surges at the line the home side scored via, Sikeli Nabou.

Andrew Kellaway's conversion attempt went wide meaning the Steelers were only down by a point 14-13.

The Aucklanders soon fired up and upped the tempo of the game. With the Steelers back-pedalling Plummer spotted a hole on the fringes of the ruck. Plummer seized the opportunity to scoot away for Auckland's third try of the night.

Daniel Kirkpatrick added a sideline conversion and the visitors headed up the Southern Motorway with a 28-13 win.