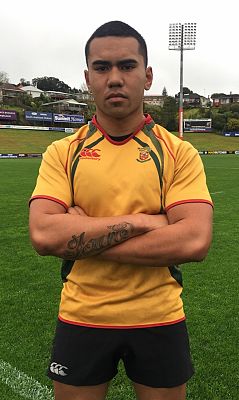 Manurewa High School 1st XV Captain - RJ Ioane is hugely excited about this weeks Rainbows End Cup GRAND FINAL. The team will take on Cambridge High School, this Friday at 3.30pm, ECO Light Stadium in a curtain raiser match to the Game of 3 Halves between the Steelers, All Blacks and Taranaki.

Rj credits the coaching and management staff for their efforts throughout the year, helping the team to achieve their finals spot. "It took a lot of hard work and commitment to get here. We have a strong brotherhood in the team and we all have the heart for rugby and are looking forward to the challenge".

He says the team have prepared very well for this game, "the boys focus and attitudes at trainings have been very sharp". The team will look to gain some ascendency through the pack which will not be easy against a hot Cambridge side. Rj believes that a good team performance should secure the result if they execute well.

The young men are super excited about playing on the same field as their heroes and curtain raising for the best sporting team on the planet, the ALL BLACKS. Ioane believes it is a huge privelige and hopes to do his team, the school and their families proud.  "We are doing this for REWA. However if you are from another school or club in Counties, come down and support the team as we are representing Counties also".

Cambridge High School 1st XV has had an up and down year to date, but the fact that the team has made the final is a very unexpected way to finish the season but not a surprising way considering the potential that this team has.

The high point of the season so far has been the win against Hamilton Boys High School 2nd XV in the Chiefs Trophy and the win over Te Awamutu last week in the semi final of the CMW Premier 1st XV competition.

One of the low points have been the loss of some of our squad for the season due to injury especially when this season was their last season of 1st XV rugby before moving into life after secondary school.

However even with the set backs throughout the season we have ultimately met one of our teams goals for the season by making the final, just one more goal to tick off.