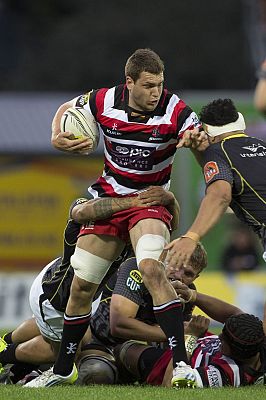 The good news continues for the Counties Manukau Steelers as they confirm the re-signing of loose forward Ronald Raaymakers for the 2017 season.

The popular, uncompromising forward, who has built his reputation on his abrasive style of play and impressive work ethic, re-joins the Steelers after being kept on the side-lines due to a shoulder injury.

Steelers’ Head Coach Darryl Suasua said, “It is great to have Ronald back. He is a great addition to our forward pack with his hard-edge, no-nonsense manner and style of play.”

The 27-year-old dairy farmer from Waiuku has played for the Steelers 51 times, having previously represented Counties Manukau at the U20 level.  The former Blues, New Zealand U20s and U17s player returned to Counties after attending Sacred Heart College in Auckland where he played Auckland age-grade rugby.

The new father said, “This is where I have grown up, so any opportunity to play for Counties is awesome. It is great to be back. I didn’t think I would get back on the scene after my injury, so I am really stoked and will give it my best shot.”

Counties Manukau CEO Bart Hoggard said: “Ronald is another great addition to the Steelers. He is well respected by Counties supporters and we are all excited to see him back on the field.”

It will be an exciting season for the Steelers with the men in red, black and white playing the All Blacks and Taranaki in a Game of Three Halves at ECOLight Stadium on Friday 11 August at 6pm.

Tickets to the Game of Three Halves are on sale at the union office at ECOLight Stadium and from iTicket.co.nz. Prices start at $10 for adults, $7 for students with kids 13 and under free on the South Auckland Motors’ embankment. Prices for the grandstand are: adults $20, students $15, and kids 13 and under $10.

The union will also be hosting special British Lions nights at ECOLight Stadium’s function room for each of the All Blacks v Lions tests – on Saturday 24 June, Saturday 1 July and Saturday 8 July.

Welsh rugby icon Phil Kingsley Jones will MC the evenings, with guest speakers including Frank Bunce, Walter Little, Pita Alatini and other rugby personalities. Tickets, which cost $80 per person, include a three-course meal and drinks accompanied by the match shown live on the big screen. Each of the events will start at 6pm. To book phone 09 2370033 or email admin@steelers.co.nz.

Kingsley Jones said: “We will create our own bit of British Lions atmosphere at Counties. It is ideal for those who couldn’t get tickets to the games and for those who want to stay local. They are going to be highly entertaining nights so book early.”

The Steelers will kick off their Mitre 10 Cup season at ECOLight Stadium on Saturday 19 August and will be proudly wearing PIC Insurance Brokers across the chest of their playing strip.

Season memberships are available from www.steelers.co.nz or the union office, but be quick because we are offering a special  BUY ONE GET ONE FREE deal until 31 May. ENDS