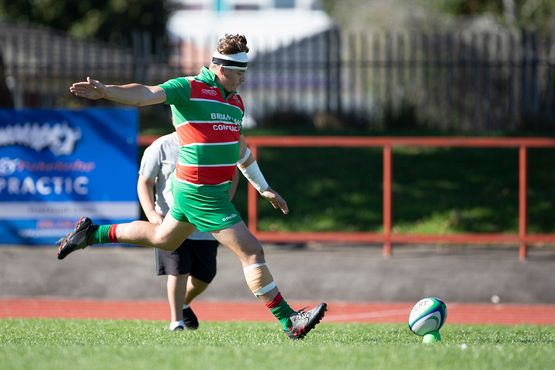 Waiuku Brian James Contracting put a dent in Manurewa Kidd Contracting’s chances of hosting a semifinal with an upset 12-10 win at Mountfort Park on Saturday.

The visitors strong second round showing continued as they pushed Manurewa hard and went into halftime down 10-5. But they were even better in the second spell and secured a victory that propels them clear of the standings’ cellar.

“It was a real tough one in terms of the conditions,” Waiuku coach Lawrence Lawrence said. “We played into the wind and just had a huge defensive effort in the first half that gave us a shot going into the second half.

“Just having a bit of ball and building possession it was just a matter of time really before we could score.

“It was a huge effort from our players.”

While extremely pleased with how his side has performed in the second round, Lawrence also holds a certain amount of frustration with the slow start to the campaign his side endured.

“Bit frustrating because we knew we were capable of putting ourselves in towards semifinal hopes. That fits and starts in the first round really caught up.

“This is my first year back out here so it is going to take time to build something and we are getting there.”

Bombay all but ended Pukekohe Mitre 10 Mega’s semifinal aspirations with a 20-15 win up the hill. Bombay picked up a vital win as they chase a return the semifinals in 2019 while Pukekohe fell to their fifth-straight defeat.

“We were reasonably pleased when we turned at halftime 10-nil down,” Bombay coach Jeff Marr admitted. “We had been running into a horrendously strong wind – in my time at Bombay I don’t think I have ever seen a wind as strong as that.

“It was full-on for the whole game.

“The second half we knuckled down and we got ahead in reasonably quick time but Pukekohe kept coming at us.

“Overall I was really pleased with the result.”

Doug Sanft’s side ran in six tries in the process and consigned Karaka to their second straight defeat.

“I thought it was a tight first half,” Sanft said. “I knew Karaka were going to be up for the game because they need to win to try and make those playoffs.

“They couldn’t finish off some of their opportunities in the first half and just before halftime we scored and I think that is when it all changed.

“Then we turned around and put up 31 points in that second half.”

Sanft played a couple of players out of position in the game and was pleased with the way those players responded. He admits, with an 11-point lead on the competition ladder, he will look to be a little strategic with team selection during the run to the semifinals and rest key players or anyone carrying an injury niggle.

“That is certainly the case when we get closer to playoffs,” he said. “I am trying to get that right with injuries – they will be crucial in the playoffs.”

Onewhero Silver Fern Marquees collected four tries in their 24-17 win over Papakura Ray White, which was a battle that will go a long way to determining the wooden spoon.

The visitors show out to an early 17-0 lead before Papakura produced a comeback of sorts. It wasn’t enough though and Onewhero secured their third win of the season.

Te Kauwahta continued on their merry way in Sid Marshall Shield Premier 3 with a 31-5 win over Ardmore Marist. They top the table ahead of Maramarua with Ardmore Marist and Drury holding third and fourth respectively.

Patumahoe Albycon Ltd thumped Pukekohe 46-18 to all but secure a top-two finish in Massey Cup Under 21 play. Competition leaders Manurewa got a default win over Waiuku.

Karaka Razzlers claimed a narrow 10-7 win over Onewhero in Under 85kg competition while Pukekohe beat Weymouth 46-15. Patumahoe Pak N Save thumped Bombay 43-0 and Waiuku were far too strong for Beachlands Maraetai 44-0.

Manurewa women enjoyed a big win over Eden with a 58-0 thrashing while Patumahoe collected another win in their debut season – a 27-22 win over Manukau. Drury, Weymouth and Ardmore Marist all went down in their games.