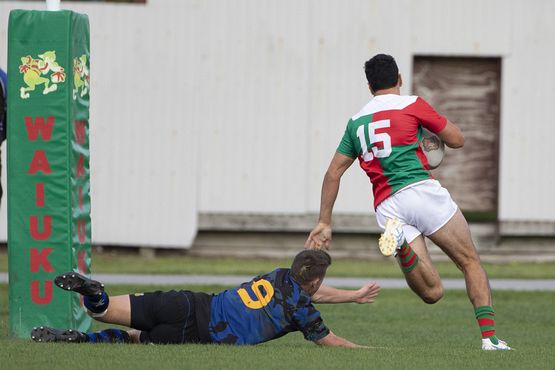 Waiuku Brian James Contracting earned their second win of the season and first since the opening weekend as they edged Onewhero Silver Fern Marquees 22-19 at Rugby Park as the club celebrated its 125th jubilee.

It was a massive day for the Waiuku club, who hosted a junior pre-season event in the morning and got a terrific turn-out in the afternoon to celebrate their special day.

“I am pretty happy overall for the occasion first and foremost but just to get ourselves back on track a bit,” coach Lawrence Lawrence said.

“We knew it would be a tough one and who could dominate the forwards. They definitely had a bigger pack than we did but it was about being in the grind longer, which was good for us.”

A number of club stalwarts were in attendance as one of the proudest clubs in the region celebrated a special milestone.

Legendary Waiuku and Counties Manukau forward Alan Dawson addressed the players before the game and it clearly had an impact on their performance.

“I think [occasion] did definitely [have an impact],” Lawrence said. “We were quite fortunate to have Alan Dawson come into the sheds before the game and have a yarn to the boys about certain things and what the club means to those guys and I think the boys took that on board.”

The home side was desperate to win to keep pace with the top four and snap a two-game losing streak and they did so in style with their best performance of the season.

“I feel really good,” coach Reon Graham said. “It has been a little while since we have sung our song so the boys wanted to do that and wanted to protect our turf and they did that really well.”

The two clubs share a healthy rivalry and there are some families that have ties to both clubs – including Graham himself, who’s daughter is the partner of Bombay halfback Liam Daniela.

“I was really happy with the overall performance because we have played really well in patches but haven’t really been consistent for 80 minutes but we got a lot closer to that today.”

Counties Power Cup holders Manurewa Kidd Contracting had to work hard to get past the improved Karaka side 18-16 at Karaka Sports Complex. The home side took a 16-7 lead into halftime but Manurewa stormed back in the second spell to extend their winning streak to six matches.

“Credit to Karaka they defended really well and took it to us throughout the match,” coach Jeremy Clark said. “The first 20 minutes – I don’t think we could get out of our own half.

“Halftime came at a good time as we could reassess and look at how we were going to take the second half and to the boys’ credit, we kept Karaka scoreless.

“The biggest thing for me was that we made a couple of changes in the front row because we were getting penalized a lot for the scrumming. We made a key change there and the scrum got a lot more solid and we were able to play off that platform.”

Manurewa will face defending champions Ardmore Marist South Auckland Motors, who had the bye this week, in a mouth-watering clash in next Saturday’s Counties Power Game of the Week.

Pukekohe Mitre 10 Mega secured a bonus point 53-14 win over Papakura Ray White to move into second on the ladder.

Coach Sean Polwart was delighted with how his side handled a tricky opponent in Papakura, who have shown big improvement across the first round.

“We had seen Papakura have certainly piled points on some other teams and we knew they had ability with ball in hand so we prepared the boys well,” Polwart said. “We have been mediocre the last few weeks and so we had a big focus this week at home on getting back to who we were.

“I thought we started the game well and for the most part we were able to play with a bit more freedom and the boys made good decisions and we sort of put them away early enough and we were able to get some debutants on for us.

Te Kauwhata and Maramarua had wins in Sid Marshall Shield Premier 3 action while Patumahoe and Pukekohe had big wins in Massey Cup Under 21 fixtures.

Pukekohe earned an impressive 18-13 win to knock over the four-time defending champion Patumahoe Under 85kg side while Waiuku added to their celebrations by beating Papakura 27-17. Other winners in the grade were Bombay and Karaka.