Around the Grounds - July 1 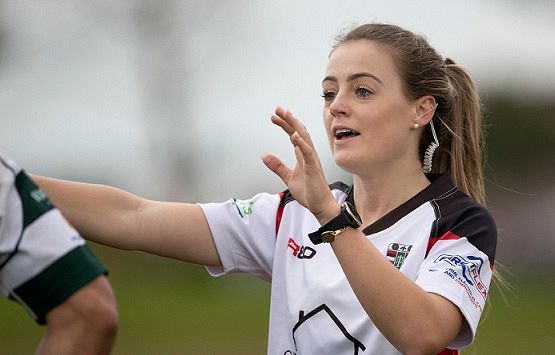 Father and son-in-law assistant referees
Father and son-in-law Reon Graham and Liam Daniela ran touch in the Patumahoe v Ardmore game last Thursday night.
PIC Steelers coach Graham was out to watch those players in contention for an NPC contract while Daniela was listed to play the game and were called on to assist.

Jenner gets national squad spot
Speaking of referees – a huge congratulations to Counties Manukau referee Lauren Jenner, who has been appointed to the New Zealand Referees high performance squad for the 2022 Bunnings Warehouse provincial rugby season.
Jenner is residing in Wellington now but represents Counties Manukau.

A young star makes her mark
And the next Lauren Jenner appears to be making their way through the local referee ranks. Liv Munro - a 13-year-old young referee has made an impression this season with the whistle.
She has controlled junior games while balancing that with playing for the Beachlands Maraetai club.
She joins fellow Beachlands Maraetai youngster Amelia Llewelyn as two very talented up-and-coming referees in the region.

Puni refurbishment going to plan
The refurbishment work at Puni Rugby Club is going to plan with the painting of the exterior done as well as work on the ceiling.
The kitchen should be installed by the Friday and filming is active and a real buzz.
On behalf of Puni Rugby Club we invite everyone to the reveal on Friday 8 July 8:30am. It would be an extremely special day as Puni Rugby Club remember and give blessings for the clubhouse that was and celebrate new beginnings and memories as we look ahead.

Black Ferns trial set to be a hit
The Black Ferns trial to be held at Navigation Homes Stadium promises to be a hit with local rugby fans.
Hot on the heels of the Oceania Super Sevens, Counties Manukau is set to play host to yet another significant rugby fixture.
The country’s best female players fighting it out for selection in a World Cup year.
Tickets are on sale via https://steelers.flicket.co.nz/.

Nice gesture from Onewhero
It was great to see Onewhero win the U85kg Championship in a thrilling final against Waiuku at Navigation Homes Stadium last Saturday.
We heard there were big celebrations afterwards.
It was also a nice gesture from the club to drop off some chocolate for the Counties Manukau Union staff on Monday – it went down a treat!