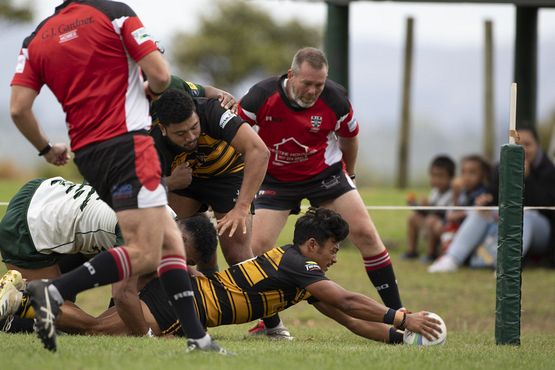 Bombay are back - underlining their title credentials with an impressive opening round win as the McNarama Cup club rugby season got underway on a wet autumn day Saturday.

A season removed from claiming four straight McNamara Cups, Bombay made an emphatic statement to beat Manurewa Kidd Contracting 30-20 at Mountfort Park and win the first Counties Power Cup Game of the Week while collecting a bonus point in the process.

“We expected a tough fight from them and they didn’t disappoint,” coach Jeff Marr said.

“We got dominance over them in the set piece and that proved a pretty telling statistic in the end because they just couldn’t get any front foot ball.”

Bombay surprisingly missed the semifinals last season on the back of a shocking opening round but they demonstrated their class in the second half of the campaign to just narrowly missing out on the playoffs.

“It was a much better start [to the season than last year] especially to get five points against a team like Manurewa,” Marr admitted. “That is the start we wanted. We will go back and do a lot of work – there is a lot of work still to do.”

Manurewa, who unlike their rivals did play in the semifinals last season, managed to collect a four-try bonus point for their efforts.

On the back of a disappointing season by their standards in 2018, the home side made a promising start to this year’s campaign.

“I am really happy with the result,” said Waiuku coach Lawrence Lawrence. “It was a bit of a scrappy game – neither side really got out of second gear. I think it came down to opportunities and we were quite fortunate to take those opportunities.”

“It is still a long season but for us, as a club, it is great to get off to a good start.”

It was a disappointing result for veteran Karaka player Ross Turnbull, who registered his 100th game for Karaka.

Creative play-maker Riley Hohepa bagged a hat-trick as last season’s runners-up made a strong start to their 2019 campaign.

“It was a typical tough game up at Onewhero,” Patumahoe coach Reon Graham said. “We had plenty of possession in the first half and we were able to turn that into points and that gave us plenty of confidence.

“To be honest the boys were just excited to get underway with the first game. There was plenty of excitement in the changing rooms and in the way they played.”

The visitors raced out of the gate and piled on 43 unanswered points in the first spell before going on with the job in the second half, all while managing to blank their opponents.

Doug Sanft’s side collected 14 tries in the demolition including four to Liam Fitzsimons.

Karaka got the better of Waiuku 28-14 in Bob Chandler Memorial Premier 2 action while Manurewa scored a narrow 19-18 win over Bombay to reverse the fortunes of their respective Premier 1 sides. Ardmore-Marist proved far too strong for Papakura taking a 78-3 win while Pukekohe claimed a 48-12 win over Weymouth in the latter’s first foray back into the Premier 2 fold.