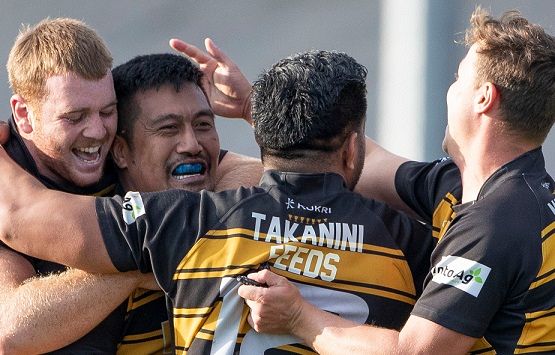 Bombay underlined their McNamara Cup semi-final credentials with a 34-19 win over Papakura at Massey Park on Saturday.

The most successful team of the past decade put on a first half clinic to be up 29-0 early in the second spell before Papakura roared to life.

Nineteen unanswered points fired the home side back in contention before Bombay calmly closed out the game in the final 10 minutes.

The win sees them draw level with Pukekohe into fourth place.

“It was very similar to last time we played them,” Bombay skipper Adam Brash said. “They are a strong team and have done a lot of hard work in their pre-season and they always came hard in that second half and they really pushed us and made us work for the win.

“Our eyes are on that fourth spot. Ideally we would be in the top three but the start of the season hasn’t gone our way.

“All we can do is play our best footy and win games and do the best we can.”

Defending champions Karaka were pushed hard by Pukekohe at Karaka Sports Complex. The visitors led for a long period and there wasn’t a lot in it until the final 10 minutes when Craig Hill’s side pushed out to a 40-7 victory.

“Pukekohe really brought it in the first 40 minutes,” Hill admitted. “They competed hard at the breakdown, had us struggling with continuity.

“In the second half we managed to get some flow and that changed the game.

“It was a real test despite the score.”

It was one-way traffic for Manurewa as they cruised to a dominant 50-7 win over Ardmore Marist at Bruce Pulman Park.

Jeremy Clark’s side bounced back strongly after the disappointment of losing to Patumahoe with time expired last week and never let the home side into the contest.

Patumahoe raced out to a big first half lead but Weymouth kept them in check in the second spell as Brad Healy’s side remained unbeaten with an 84-5 win.

“It was good to get some of our young and new boys a run,” Healy said. “I’m looking forward to the weekend off to rest up and prepare for Pukekohe.”

Puni produced a stunning performance to beat Pukekohe’s Bob Chandler side 25-12 and underline the strength of the Sid Marshall Shield this season.

Drury cruised to a 65-7 win at Tuakau while Karaka’s Bob Chandler side held off Patumahoe’s Sid Marshall outfit 36-17.

There was nothing in the two Massey Cup U21 contests this week – Papakura came storming home to pip Pukekohe 26-25 at Massey Park while Patumahoe kicked a late penalty to beat Manurewa 16-14 at Mountfort Park.

Onewhero beat Bombay 29-7 on the road while Karaka thumped Papakura 55-7.

The Ardmore Marist Women triumphed over Papakura 39-25 in the Counties Energy Game of the Week at Bruce Pulman Park.

The win keeps them right in the hunt for a semi-final berth.