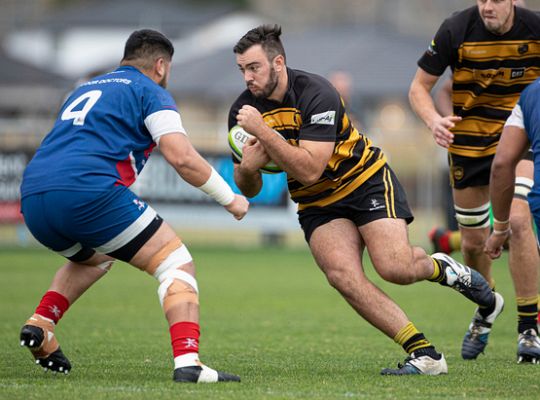 The winners of the past five McNamara Cups will do battle in Saturday’s championship finale at Navigation Homes Stadium as defending champions Ardmore Marist South Auckland Motors meet Bombay.

The two clubs came through round robin as top qualifiers and won respective semi-finals at home to earn their spot in the decider.

“We have to turn up really,” Ardmore Marist coach Doug Sanft said. “I know it is going to be a physical game.

“Like everything it starts up front around our set piece.”

Bombay were one of only two sides to beat Ardmore Marist during round robin but the top qualifiers claimed victory between the two sides in the second round.

“I know what they offer but they were missing a few of their players when we played them in the second round and they were key players for their team,” Sanft said.

Bombay coach Jeff Marr thinks his side has learned a fair bit from their two games against Ardmore Marist this season and feels they are in a position to take advantage of that.

“I think the big thing is we take confidence out of how we played [in the semi-final] and even the two times we played them this year,” Marr said. “We beat them in one and lost in the second one and there are always learnings to take from a loss.

“We will put that together and find a way to have a crack at them.

“They have had a stellar year and of course go in as favourites.”

Bombay is a season removed from winning four-straight championships and the nucleus of that side has been there and done it before in big games – something Marr feels could help come Saturday.

“I do believe that is a big factor – I think we have over 1100 caps in our 22. That is pretty huge especially in club rugby these days. They have experience of being in semi-finals and getting through these knockout games.”

Ardmore Marist will be eyeing up the rare Premier 1-Premier 2 double in what would be a massive achievement. The Premier 2 side has not lost all year and will be aiming to complete the perfect season when they tackle defending champions Patumahoe Dave Redshaw Electrical.

In a show of what they are capable – Ardmore Marist racked up a staggering 70-0 score line over Bombay in last weekend’s semi-final and will go into the match as raging hot favourites.

“Having two of our teams there will be awesome for our club,” Sanft added. “The Premier 2 side have been the shining light for the club this year.”

But this Patumahoe side has been there before and had to work hard just to get back to the final. The Jamie Bain/Brad Healy coached side loves the big occasion and will be worthy opponents.

Te Kauwhata will go into the Premier 3 final as the favourites but they should face a stern test from Maramarua. The battle of two small, rural clubs should be of big interest in those communities and a sizeable group of supporters are expected to cheer on their side.

Manurewa will start the Massey Cup U21 final as strong favourites having dominated the round robin stage and easing through the semi-final against Bombay. Patumahoe Albycon Ltd were forced to work hard to beat Pukekohe in their semi-final and will be out to cause an upset on Navigation Homes Stadium No. 2.

Drury Women tackle Grammar TEC in the final of the Women’s Development Competition at Orakei Domain.