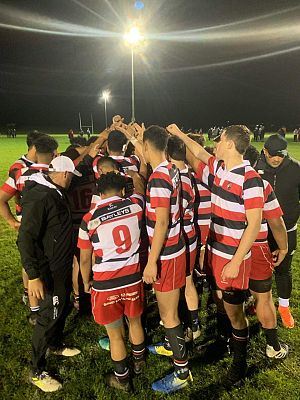 Counties Manukau vs Taranaki U16

Counties Manukau Under 16 Fall short against a determined Taranaki side 16-10.

It was a game of four seasons weather; the hailing rain came down hard with the wind pounding through the game to finish in sunny skies.

Trailing 9-0 at halftime, Taranaki scored after the break to push the score to 16-0 after a yellow card to the away side. A determined Counties Manukau side awoke in the second spell bringing the attacking flair through tries from Viliame Tuisuva and Junior Tolutau’u. A late surge to try steal the game was within reach of the posts before losing the ball 5 metres from the Try line.

Chiefs Development day scheduled for day 3 where the Counties Manukau Team will be introduced to various presentations and workshops from the Chiefs Rugby Franchise for key takeaway learnings.

Our Counties Manukau U16 lads were victorious against Bay of Plenty U16, taking out the 28-8 win in our first game of the Northern Regions Chiefs U16 Tournament.

Trailing 3-0, 15 minutes in before a spark of tries throughout the game.

Strong defensive scramble, counter attack and a hunger to perform was evident in the first game.

University of Waikato Chiefs Region Under 16 Tournament is set to showcase the up and coming rugby talent within Chiefs Country. The tournament proudly sponsored by University of Waikato will see Counties Manukau, Bay of Plenty, Taranaki and Waikato’s respective Under 16 sides take to the field from Monday 30 September through to Thursday 3 October.

Teams will compete across three days with hosts Taranaki kicking off the tournament against Waikato at 5.00pm, followed by Counties Manukau and Bay of Plenty at 7.00pm. Both games will take place at TET Stadium, Inglewood on Monday 30 September, before the tournament moves to New Plymouth Boys’ High School for day two (Tuesday 1 October) and the final round robin matches on Thursday 3 October.

The University of Waikato Chiefs Region Under 16 Tournament will not only deliver fiercely competitive rugby, the Chiefs Rugby Club will facilitate an educational day for players, coaches and parents. The educational day will be dedicated towards enhancing player’s development both on and off the field.  Players, coaches and parents will be educated on physical preparation, injury management, nutrition, social media and the Chiefs Rugby Club and New Zealand Rugby player pathways.

Chiefs Rugby Club player ID and development manager Kent Currie said it will be great to see another generation of talented individuals proudly compete for their province.

Chiefs Rugby Club chief executive officer Michael Collins said the tournament provides an opportunity for the provincial unions within the Chiefs region to collectively work together.

“This tournament is a great collaboration from our provincial unions. It provides our next generation the chance to showcase their talent, create new friendships and seek knowledge on how they can develop as individuals.”

Collins finished acknowledging the contribution Taranaki Rugby Football Union has made to deliver this year’s tournament.

“Thank you to Taranaki Rugby Football Union for delivering the tournament on behalf of the provincial unions involved. We know it will be a great tournament to be a part of and wish all those involved; players, coaches, team managers, officials and facilitators all the very best for a successful tournament,” finished Collins.

The tournament format is as follows:

5.00pm Kick off: Taranaki vs Waikato

7.00pm Kick off: Counties Manukau vs Bay of Plenty

2.00pm Kick off: Taranaki vs Bay of Plenty