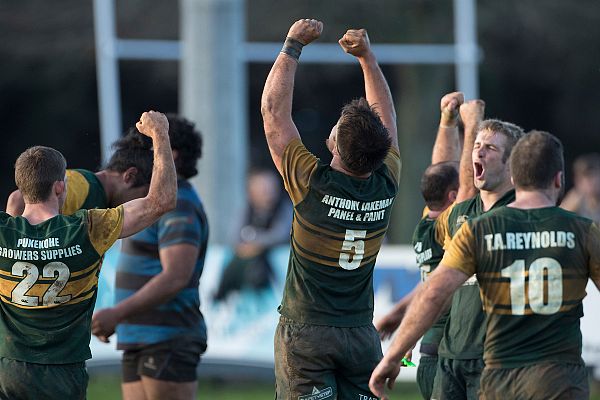 They took an early lead and were able to hold onto that advantage throughout the game.

“We talked about semifinal intensity and we didn’t want to look too far ahead,” Manurewa coach Jeremy Clark said.

“We were mentally switched in making sure we did the job. It was a hard-fought battle and our forwards really stood up and got us over the line.

“It was a war of attrition as well and the boys know they’ve been in a contest.”

Waiuku improved as the season went on and have created something to build on for next season.

Karaka had the clear task of needing nothing less than a bonus-point win over Papakura Ray White to make an unlikely semifinal appearance.

Scott Penney’s side looked completely out of the playoff equation a month ago but produced stunning wins over two of the competition’s leading sides before taking maximum points in 37-6 victory against a Papakura side that bettered them in the first round.

“We went into Papakura knowing they are the improved side in the competition,” Penney said. “They have knocked over a couple of teams, including us in the first round.

“They had nothing to lose. We did look a little bit tired to start with and got sucked into their forward-oriented game but once the ball started to go our way we got into the swing of things and did the business.”

Karaka held onto the Counties Power Cup as a result of the win.

It was a disappointing finish for a Papakura side that continued to make significant strides in 2018. With improved performances across all of their senior teams, there is hope Papakura can push on and be a semifinal contender next season.

The competition’s leading side all season Ardmore Marist South Auckland Motors confirmed their overwhelming favourites tag to win the McNamara Cup this season by breezing past second-placed Patumahoe Troydon Patumahoe Hotel 37-15 at Patumahoe Domain to take out the Challenge Cup.

Both sides had a couple of key players missing due to injury but the visitors looked threatening whenever they were able to string some phases together while their defense was also very tight.

Coach Doug Sanft was happy with what the dead-rubber final round contest provided.

“That was a solid game from Patty – they put up a challenge,” said the Ardmore-Marist coach and former Patumahoe championship winner.

“I think we were just looking for momentum and I think we got that in patches.”
Sanft would like to see his side make a few improvements heading into sudden death action next week.
“Just our decision-making at times – we were caught on our 22 and we were still trying to play so that could be better.”

The loss ends Patumahoe’s unbeaten run in the second round.

Ardmore Marist will host Karaka in one semifinal next weekend at Bruce Pulman Park while Manurewa travels to Patumahoe in the other one.

Pukekohe Mitre 10 Mega took out a close-fought 32-26 win over Onewhero Silver Fern Marquees in a match both clubs worked together for to raise money for the Cancer Society.

Specially designed jerseys were worn by both sides and auctioned off afterwards in what was essentially a dead-rubber match.

Both clubs will be disappointed with their 2018 campaigns but Pukekohe coach Mark Price can at least take something from this win into next season.

“It is always good to get a win to finish the season,” he said. “It hasn’t been the best of seasons for us but we did finish it off in a good way.

“Both teams played in the spirit of the occasion and it was a typically hard battle between our clubs.”

The final tally hasn’t been added just yet but well over $20,000 was raised on the day.

Patumahoe Dave Redshaw Electrical held their nerve and powered to an impressive 27-14 win over Ardmore Marist Ross Roof Group to secure a semifinal spot in Bob Chandler Premier 2 action. The match was close during the first half and the two sides swapped the lead a handful of times before the home side started to find some advantage in close quarters play. Manurewa Wise Property Management had little trouble in beating Waiuku 42-20 to confirm second place and a home semifinal while Karaka thrashed Papakura 83-7 to seal fourth spot. Pukekohe Franklin Long Roofing finished the season on top, winning the Don Shuker Cup, and will host Karaka next week with Patumahoe traveling to Mountfort Park in Manurewa.

Weymouth had already secured the Bill Marsh Cup before the weekend started and will host Maramarua in one semifinal while Drury travels to Te Kauwhata in the other semifinal.

Patumahoe Albycon Ltd survived a second half comeback from Ardmore Marist Ross Roof Group to win their match 31-29 at Bruce Pulman Park. Both sides had already qualified for the semifinals/ Bombay beat Papakura Ray White 31-17 in a dead rubber fixture. Pukekohe will meet Ardmore Marist in one semifinal at Colin Lawrie Fields while Patumahoe travels to Karaka Sports Complex to face Karaka in the other sudden-death contest.

That sees three-time defending champions Patumahoe Pak N Save go through as top qualifiers where they will host Pukekohe next week. Papakura will meet Karaka in the second semifinal.

It means that both Patumahoe and Karaka have got teams in semifinals of four senior grades – Premiers, Premier Reserves, Under 21s and Under 85s.