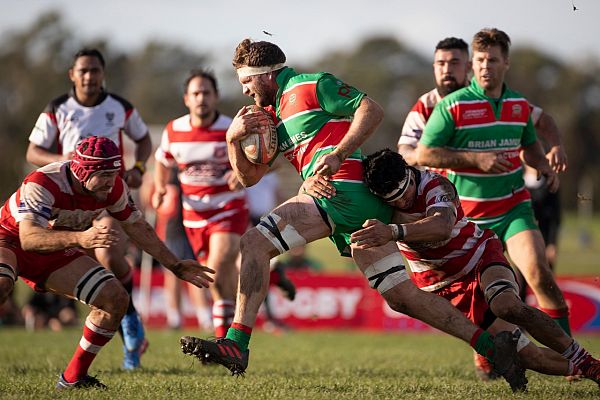 Doug Sanft’s side came through one of their biggest tests of the season – the defending champs at the business end of the season away from home – with flying colours.

The six tries to three win means that one more win from their final three games will secure top spot heading into the semifinals.

“It was some good learnings,” Sanft said. “I am happy with the win but we learned a lot about where we are at and Bombay put us under a lot of pressure especially in the first 50 minutes.

“It felt like a playoff game – it was intense right through the first half. We scored, they scored – it was real tight in the first half but maybe our skill-set stood out in the second half.”

Sanft was particularly happy with the performance of his front row – the starting side and the one that came on as replacements.

Ardmore Marist retained the Counties Power Cup in the process.

Bombay falls to fifth on points differential and have one less game to play than their semifinal rivals.

Karaka moved into a share of fourth place with a vital 22-18 win over Waiuku Brian James Contracting.

The home side found themselves down 13-5 at halftime but produced a spirited second half performance to bag their second successive win.

“I was really pleased with the team’s performance this week,” coach Scott Penney said. “We played a really good Waiuku side that had some injured players back this week and we managed to come out on top.

“I am super proud of the guys.”

Patumahoe scored eight tries in the one-sided result including a hat-trick to winger James Brady. Manurewa’s Willie Tuala still tops the AS Wilcox Leaderboard with 16 on the season.

It means Reon Graham’s side jumps ahead of Manurewa to second on the championship ladder.

“The main thing for us is that we spoke all week about how tough Onewhero is at home and how they don’t traditionally give in so we needed a real 80 minute performance,” Graham said.

“We stuck to our patterns really well for the full game.

The Patumahoe v Karaka match next weekend looms as one of the key match-ups that will have a big outcome on the semifinals.

Pukekohe Mitre 10 Mega got a much-needed win to boost their season after a string of disappointing performances. They proved too classy for Papakura Ray White 37-22 at Colin Lawrie Fields.

“I think it was hugely important – more for the boys than anything else,” Price said. “It wasn’t so much the win itself but the way the boys won.

“We were under a lot of pressure early on – Papakura came out strong and hit us with some early points. The way the boys bounced back I was really proud of.”

Pukekohe’s win keeps their semifinal hopes alive. With winnable games against Waiuku and Onewhero to go and a grudge match against Bombay, Price’s side remains in with a show of making the top four.

“They know where we are at in regards to the table and we are still not out of it,” Price said. “If we take the last couple of weeks against Manurewa and Ardmore out of the equation we have been really close. They know we are somewhere there.”

Weymouth continued their unbeaten run in Premier 3 beating Maramarua 55-10. Te Kauwhata racked up a triple digit win in thrashing Karaka 106-0 while Puni held off Drury 36-34 in a cliffhanger.

Patumahoe Albycon got a crucial 31-22 win over Karaka in Massey Cup action – a replay of last season’s finale. Ardmore Marist Ross Roof Group proved too much for Bombay winning 32-18.

Papakura Ray White took an impressive 41-12 win over Waiuku in the Under 85kg competition. Patumahoe Pak N Save proved too strong for Karaka 32-10 while Pukekohe hammered Onewhero Bottle’O Tuakau 49-5