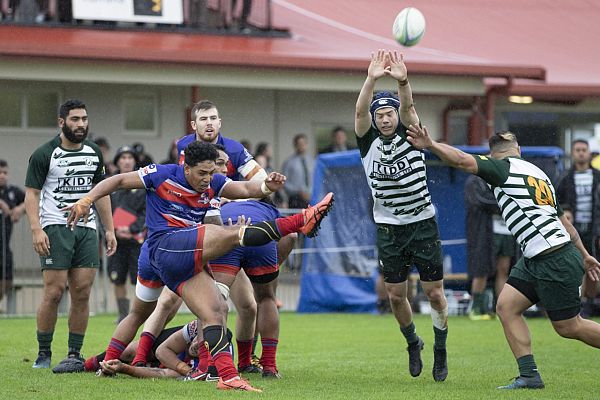 The home side stretched their winning run to eight games and have now beaten every side in the competition.

“I can’t really say if that is the last box ticked because I feel we still have to do some work moving forward and thinking ahead to the playoffs,” coach Doug Sanft said.

“They are one of the top teams and no doubt they will be in the playoffs.

“We fronted up physically. Our set piece was good and our defense was solid. It was what we planned out for the week.”

Ardmore Marist now has a six-point buffer back to Manurewa in second place.

Pukekohe Mitre 10 Mega and Karaka split the spoils in their second round clash at Colin Lawrie Fields on Saturday with the teams finishing the match locked at 18-18.

The two sides couldn’t be separated over the 80 minutes.

“It probably was a fair result,” Pukekohe coach Mark Price said. “It was a pretty physical and hectic game but we were disappointed we didn’t come away with the win. We had opportunities to take it but we didn’t take them but I suppose Karaka will feel they are in the same boat.

“We played pretty poorly last week so to bounce back with a strong performance was important for us. Unfortunately we didn’t quite come away with the win.

“A few handling errors and decision-making was the difference in the end.”

Bombay continued their resurgence with a bonus-point 49-33 win over Onewhero Silver Fern Marquees at home.

The four-time champions moved into a share of fourth spot on a congested ladder – joining Pukekohe and Karaka on 25 points with their fourth straight win.

The home side couldn’t repeat last week’s upset win over Karaka but demonstrated their improved play as they pushed the early-season leaders all the way.

Patumahoe coach Reon Graham was pleased with the result and happy that his side made some big improvements after last week’s big loss to Ardmore Marist.

“Papakura are a good side – certainly much-improved from the first round,” Graham said.

“A couple of things we focused on this week we put into play really well so I was happy with that. Especially some of our defensive areas were a lot more improved.”

Te Kauwhata thumped Karaka 76-5 in Premier 3 play. Weymouth remained at the top of the standings with a 50-0 win over Maramarua while Drury beat Puni 41-12.

In Under 21 action Pukekohe kept their unbeaten start to the season alive with an impressive 19-12 win over Patumahoe Albycon Ltd. Karaka kept pace with them however taking a 27-21 win over Bombay while Ardmore Marist Ross Roof Group beat Papakura Ray White 29-19.

Patumahoe Pak N Save cemented their place at the top of the Under 85kg standings with a 29-7 win over Pukekohe at Colin Lawrie Fields. Onewhero Bottle’O Tuakau grabbed a 13-7 win over Waiuku while Karaka thrashed Bombay Lincoln Farms 45-7.