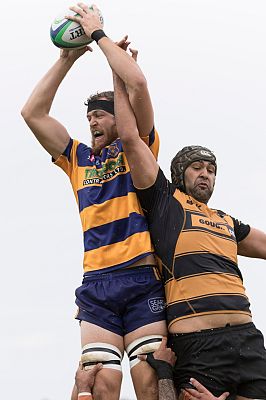 Patumahoe Troydon Patumahoe Hotel retained the Counties Power Cup, took hold of the Zane Perkins Cup for the first time in a number of years and remained the only unbeaten side in the McNamara Cup with a 26-23 win over Bombay at Patumahoe.

Bombay had the game under control for 79 minutes and demonstrated so much of the composure that has seen them win four straight championships but a fired up home side managed to steal victory at the death in a dramatic match.

A penalty try ultimately decided the outcome of the game – Bombay had been penalized a number of times in the red zone in the moments leading up to fulltime.

Patumahoe coach Reon Graham was thrilled to get the result in such a tough encounter.

“To get it right at the end was really good,” he said. “It just showed the boys didn’t give up. They had to dig deep for it especially when they got away on us in the first half.

“It was a tough battle that we knew we were going to get and it could have gone either way.

“We will take heaps from it especially reacting under pressure. We didn’t react too well under pressure – it wasn’t until we started scoring some points that we went back to our game and started relaxing a bit.”

Graham thinks that win will have a lasting impact on his side, giving them some real belief that they can match it with the best sides in the competition.

“That and they have had the wood on us for the last few years so it is good to get one back,” Graham added.

Lock forward Willy Furniss was named AS Wilcox Player of the Day and he earned praise from his coach.

“Willy Furniss’ work rate was outstanding and Jimmy Brady really put his hand up against his old club. It meant a lot to him and boys got around him and tried to win it for him,” Graham said.

“The Royal brothers as well who backed themselves in the lineouts at the end and brought it home.”

Pukekohe bounced back from last week’s loss to Patumahoe with an impressive 27-8 win over Manurewa Kidd Contracting at Mountfort Park.

It ended Manurewa’s unbeaten run to start the season.

Pukekohe coach and former Steelers hooker Mark Price thought the win came on the back of a strong showing from his team’s forward pack.

“Very pleasing,” he said. “The boys dropped a little bit last week against Patty, who is a very good side, to bounce back and get a win like that up at Manurewa, which is never easy, was very pleasing.

“A lot of the praise definitely will have to go to our forwards. We knew they had a very good forward pack and a good size pack so we had to front and they did. They laid a good platform in the wet and the forwards really stood up.”

Pukekohe had a slow start against Karaka in round one before really kicking into gear and getting the win. They lost a scrappy game to Patumahoe in round two before an impressive third round win yesterday.

Price is comfy with where his side is at this far into the competition.

“At this time of the season – it is hard to gauge where everybody is at until you start hitting that fourth or fifth round. We still have some guys to come back from injury so we are pretty happy.”

Onewhero continued their strong start to the season as they held off Waiuku Brian James Contracting 28-22 at Rugby Park in Waiuku.

Former New Zealand rugby league international Lesley Vainikolo praised his side’s forward pack for taking it to another side known for its play up front.

“I am very pleased with the result,” Vainikolo said. “I think the boys played really well. We knew Waiuku was going to be a hard team to play at home.

“I am really happy with our forwards – when you have strong performances from the forwards it makes it easier for the backs. We have some strong leaders there and they did really well.”

Onewhero has won two from three to start the season and were unlucky not to have gotten the points against Bombay in round one. It sends encouraging signs about what the team is capable of this season.

“The results will look after themselves so I am concentrating on building this team,” Vainikolo said. “Looking at last year they probably should have won some of the games they lost and I am trying to push past that stage of there being no ifs or buts.”

After a disappointing first 40 minutes in round one Ardmore Marist has kicked into gear and strung together some strong performances.

Coach Doug Sanft is happy to see improvement each week.

“I think we had a good start,” he said. “We went through our processes with how we want to play the game. It got a bit untidy in the second half as guys got a bit individual but they are all learnings for us.

“We were a bit more clinical on our opportunities when we got in their 22.”

He nominated his tight forwards as those that stood out.

“I think our front row,” Sanft said. “Papakura has a heavy pack but our young guys in the front row they looked good yesterday. They have put in the extra work this week.”

Karaka scored their second win of the season as they thrashed a short-handed Te Kauwhata EnviroWaste 59-6 at Karaka Sports Complex.

“Another good win for us,” said coach Scott Penney. “We had a few of the senior boys away this week, which was a good challenge for us. We managed to put a lot of the younger boys out including three Auckland Grammar boys straight out of school and give them a taste of prem rugby, which was excellent.

“But just looking at our team and what we are achieving in regards to our little targets for defense and attack we are chugging on quite nicely.”

In Premier 2 action Papakura secured an impressive 15-10 win over Ardmore Marist Ross Roof Group. Pukekohe recorded a 50-17 win over Manurewa Wish Property Management while Patumahoe Dave Redshaw Electrical enjoyed a 26-7 win over Bombay and Waiuku had a 69-10 victory over Onewhero.