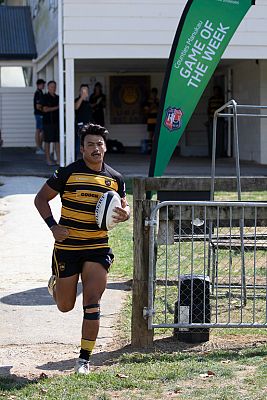 Pukekohe Mitre 10 Mega held their composure in the closing stages to lift the Counties Power Cup and secure a 23-15 win over Patumahoe Troydon Patumahoe Hotel at Colin Lawrie Fields on Saturday.

The home side shot out to an early lead courtesy of a couple of quality pieces of attacking rugby and a long-range intercept try despite Patumahoe dominating territory and possession.

The visitors blew a couple of first half opportunities but worked their way back into the contest through the middle stages. Down by five with less than 10 minutes to play, Patumahoe spent a period of time attacking the Pukekohe line in search of the go-ahead score. But Pukekohe defended strongly and resisted the charge before skipper Gregor Christie collected a close-range intercept and set off downfield.

Pukekohe added a penalty to secure the win – their second successive victory over 2018 semifinalists to start the season.

“We started really well but again our discipline really let us down,” coach Sean Polwart said. “I think the penalty count was 15-3 so we spoke to the guys at halftime and we just have to be better than that.

“That win came down to our defense and our attitude really.

“Patumahoe play a great expansive game – they are well coached by Reon Graham - and they continued to build phases on us so that period at the end was key for us.”

With successive wins against sides that have been perennial playoff teams in recent seasons Pukekohe have asserted themselves as one of the sides to beat in 2019.

“The guys are starting to know the identity of what this group is about,” Polwart added. “That is the key for us getting back to playoff rugby – knowing how we go about getting wins. We took a step towards that but we have still got a lot to go.”

Pukekohe will get the biggest test of the season so far when they face the defending champions next week.

Bombay made it three from three as they eased to a 24-7 win over Onewhero Silver Fern Marquees in the Counties Power Game of the Week.

The match served as a special occasion for a stalwart on each side. Veteran prop Sean Bagshaw played his 100th game for Onewhero while halfback Liam Daniela brought up the same milestone for the visitors.

Jeff Marr’s side secured the four-try bonus point in the process and continued their strong start to the season although he felt his side blew a lot of opportunities.

“It was great to get the five points but we weren’t clinical enough with what we wanted to do,” Marr said. “We created a lot of opportunities but it was a real scratchy win really. Full marks to the opposition for giving us a really good battle.”

Daniela becomes a centurion at the tender age of 24 and has already achieved a remarkable amount of success in a short space of time. Marr was full of praise for his instrumental number nine.

“Both of them are great stalwarts. For Liam, he has been loyal and true to Bombay and he has been in that golden run with four championships.

“He has a lot of voice around our team and shown a lot of leadership. He is ultra competitive and we all know he loves a bit of chat on the field.

“He inspires our boys too.”

Manurewa Kidd Contracting secured their first win of the season with a convincing 43-8 victory over Papakura Ray White at Massey Park.

Powerful forwards Viliame Taulani and Bruce Kaino had big games for Manurewa while Sandro Jelia bagged a double and Logan Fonoti collected a personal haul of 13 points as Jeremy Clark’s team got their campaign going after a first-round loss to Bombay and an early season bye.

“It was a tough one,” Clark said. “For the first 20 minutes Papakura came firing out of the blocks. Defensively were on the ropes and we were scrambling a lot.

“It was 7-3 at halftime but we got on top of them and scored some quality tries late in the game.

“After the Bombay performance I think the bye came at the right time but then you sort of have to start again.

“As we got more patient with the ball in hand we could do a bit more damage.”

Defending McNamara Cup champions Ardmore Marist South Auckland Motors gave the competition a reminder about their awesome potential as they clocked up a century against a hapless Waiuku Brian James Contracting at Rugby Park.

Ardmore Marist ran in a phenomenal 17 tries in the demolition while Sailoosi Vatubua picked up five himself. Liam Fitzsimons, Christian Kelleher, Viliame Rarasea and Jonathan Taumateine had try doubles as well.

“I think some of the ball just stuck. It was all around execution and we executed really well yesterday,” coach Doug Sanft said.

“I think Waiuku were missing some players and there were a few injuries in the first 5-10 minutes and that didn’t help them yesterday.

“It is early season and they had a few injuries and they can only get better.”