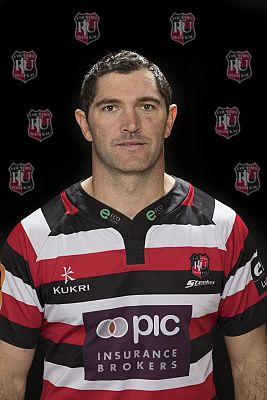 The 33-year-old former Waiuku and Wesley College student is returning to where his career started, joining the PIC Steelers as they prepare for their Mitre 10 Cup opener against Auckland on Saturday.

The popular rugby player, who has been busy with the release of his book, is looking forward to this new challenge.

“I still believe I have plenty to offer the game and I can add value to this Steelers team, while also working in the region to encourage more kids to be active.”

Donald grew up in Waiuku where he played his junior rugby, running out for the Premier side in 2002 before winning the 2003 championship alongside current Steelers assistant coach Grant Henson.

After playing his age-grade representative rugby for Counties Manukau, the first five-eighth debuted for the Steelers in 2001 while still at college, playing alongside his schoolmate, Sitiveni Sivivatu. In 2002 and 2003, he continued to play in the Steelers side coached by former All Black centre Bruce Robinson, making 22 appearances for the team before moving down the motorway to play for Waikato and the Chiefs.

PIC Steelers Head Coach, Darryl Suasua, is delighted to have Donald back in the region and knows the announcement will be popular with both his players and fans.

“He was huge for the Chiefs on and off the field, and we are looking forward to him helping us in all areas with his huge experience, wealth of knowledge and top personality,” Suasua said.

“We are going to have some very happy supporters with this decision.”

After Donald, nicknamed Beaver, landed that legendary penalty to secure the All Blacks’ 2011 Rugby World Cup final win, his home town of Waiuku renamed itself “Beaverville.”

Donald, who recently graduated from the University of Waikato with a Bachelor of Management Studies, has achieved a lot in rugby including a National Provincial Championship title with Waikato, making the Super Rugby semi-finals on two occasions with the Chiefs, and captaining the Chiefs to their historic 2016 win against Wales. He has also had a stint playing in Japan and for English Premiership team, Bath.

Counties Manukau CEO Bart Hoggard said: “Stephen is one of the most likable characters in New Zealand rugby and we are rapt that he has decided to come home. We will greatly value his contribution, which we know will be huge.”

The PIC Steelers’ Mitre 10 Cup campaign kicks off at 7.35pm this Saturday night at ECOLight Stadium against neighbours Auckland.

Match-day grandstand tickets are $20 for adults, $15 for students with ID and $10 for kids.

Individual tickets to the match are available from the CMRFU office, at the gate on game day or from www.iticket.co.nz.

Corporate hospitality is available for all home fixtures. Season memberships are on sale from only $50 for a South Auckland Motors Embankment membership, grandstand membership are $100 for an adult and $50 for a child. Memberships are available from the CMRFU office, www.steelers.co.nz or www.iticket.co.nz. For any enquiries phone 09 2370033.